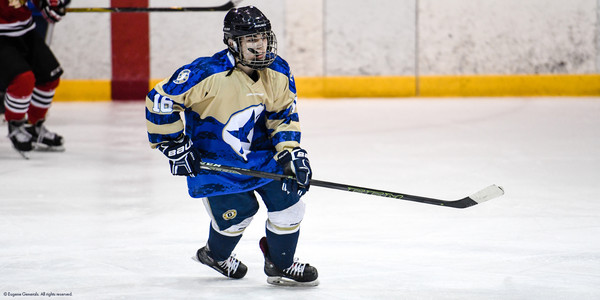 Wearing specially-designed jerseys to honor our nation's military, the Eugene Generals picked up a 4-2 win over the Portland Jr. Winterhawks on Friday night at The Rink Exchange in Eugene, Oregon.

The Generals entered this weekend's season-ending series aiming to earn the team's third consecutive win against the Jr. Winterhawks organization, and they got off to the perfect start thanks to a former Eugene Jr. General. Second-year forward Broc Friesen netted his 8th goal of the season at the 6:32 mark of the first period, a power play goal coming off a tap-in finish on the backdoor of the Portland net to put Eugene in the driver's seat early.

Later in the period, Eugene doubled their advantage with just 25 seconds left on the clock when Jackson Baughman fired a seeing-eye shot through traffic and past Jr. Winterhawks netminder Luke Turley, giving the Generals a 2-0 lead heading to the break.

However, the Portland attack was heard from before the break. Weston Robison snatched the momentum from Eugene with less than 70 seconds left in the period when he scored a gritty, solo effort goal to put the Jr. Winterhawks on the board.

Aiming to get the comeback started entering the third period, Portland began the game's final twenty minutes just how they hoped. Ethan Haas cut Portland's deficit back to two with less than two minutes off of the clock to set up a tense final 18 minutes of play.

Haas' goal was the last that the Jr. 'Hawks were heard from, though, as Larsen stopped every shot faced the rest of the way to seal a 4-2 win for Eugene.

Larsen, playing in the final series of his junior hockey career, stopped 24 of 26 shots faced while earning the win.

The Generals and Jr. Winterhawks conclude their two-game series on Saturday, March 16 at 7:30pm PST at the Rink Exchange in Eugene, Oregon. Tickets are available online at EugeneGenerals.com.

The Eugene Generals Hockey Network will provide a live, free video stream of Saturday's game against the Jr. Winterhawks. Remember to subscribe to the Eugene Generals on YouTube to stay up to date regarding upcoming broadcasts.