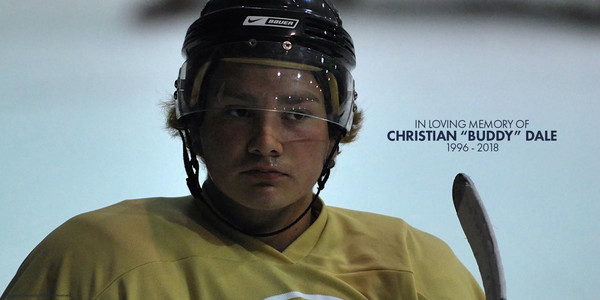 Former Generals forward and captain Christian “Buddy” Dale recently passed away after a boating accident that took place just outside of Boise, Idaho.

Dale is presumed to have drowned in Lucky Peak Reservoir after he fell from a boat and into the lake’s waters at approximately 9:00pm local time on Sunday, July 29th. His body was recovered and officially identified on Friday, August 10th.

Just 21-years-old at the time of his passing, Dale was a member of the Generals for three full seasons (2013-16) including serving as the team’s captain during the 2015-16 season. He suited up for 119 games as a General and tallied 38 goals and 53 assists for 91 overall points during that span.

In his final season as a General, Dale led the team in goals (19) and overall points (44) while helping engineer the team’s return to the postseason in the first full season under current Head Coach Justin Kern. 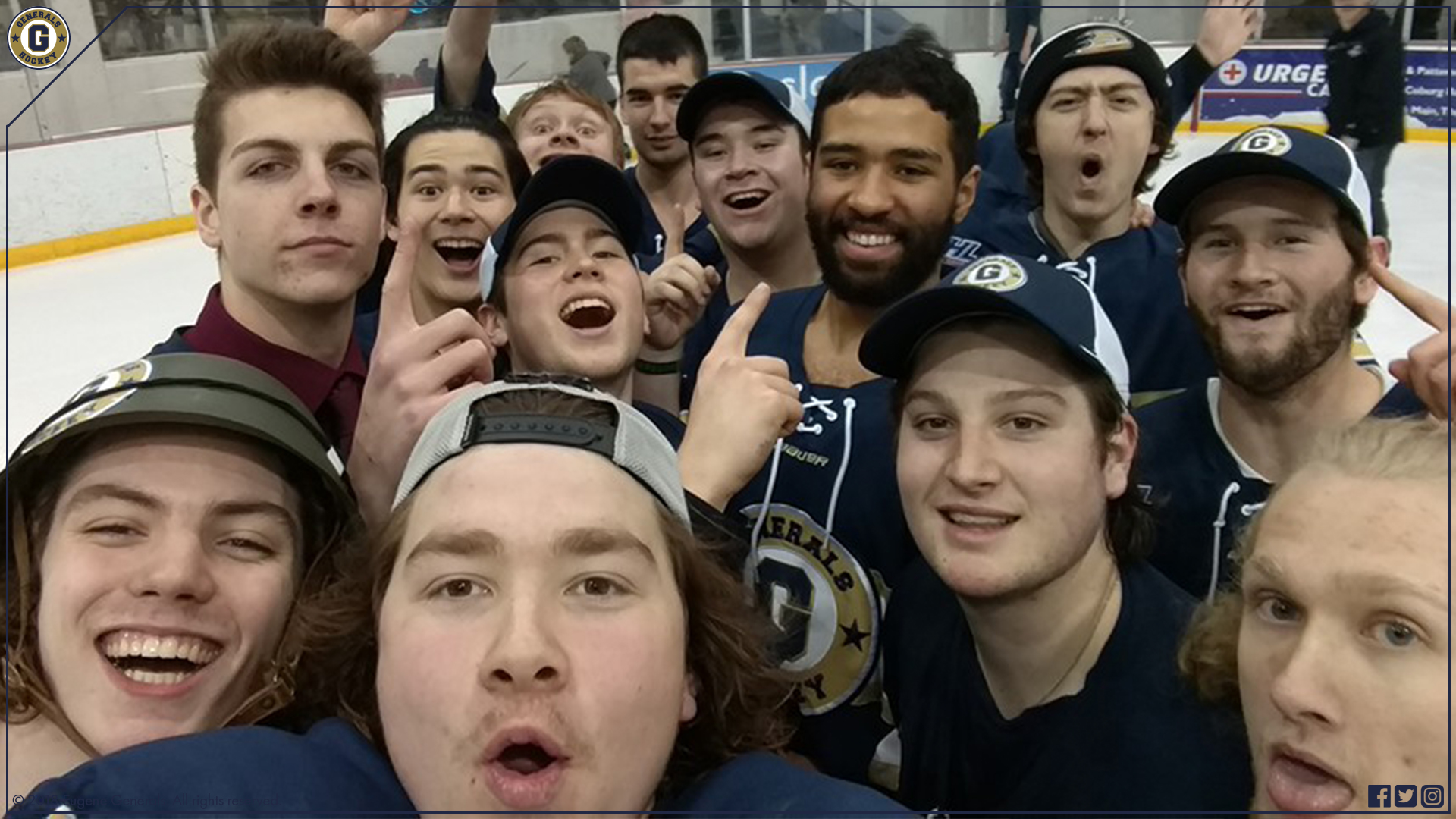 However, despite the numerous on-ice accolades and accomplishments that he netted while in Eugene, his greatest legacies came off of the ice with the Eugene Generals’ staff, fanbase and the Eugene/Springfield hockey community as a whole.

Following the devastating news of Dale's death, Generals staff members took time to compose their thoughts, emotions and memories regarding their respective relationship with him: 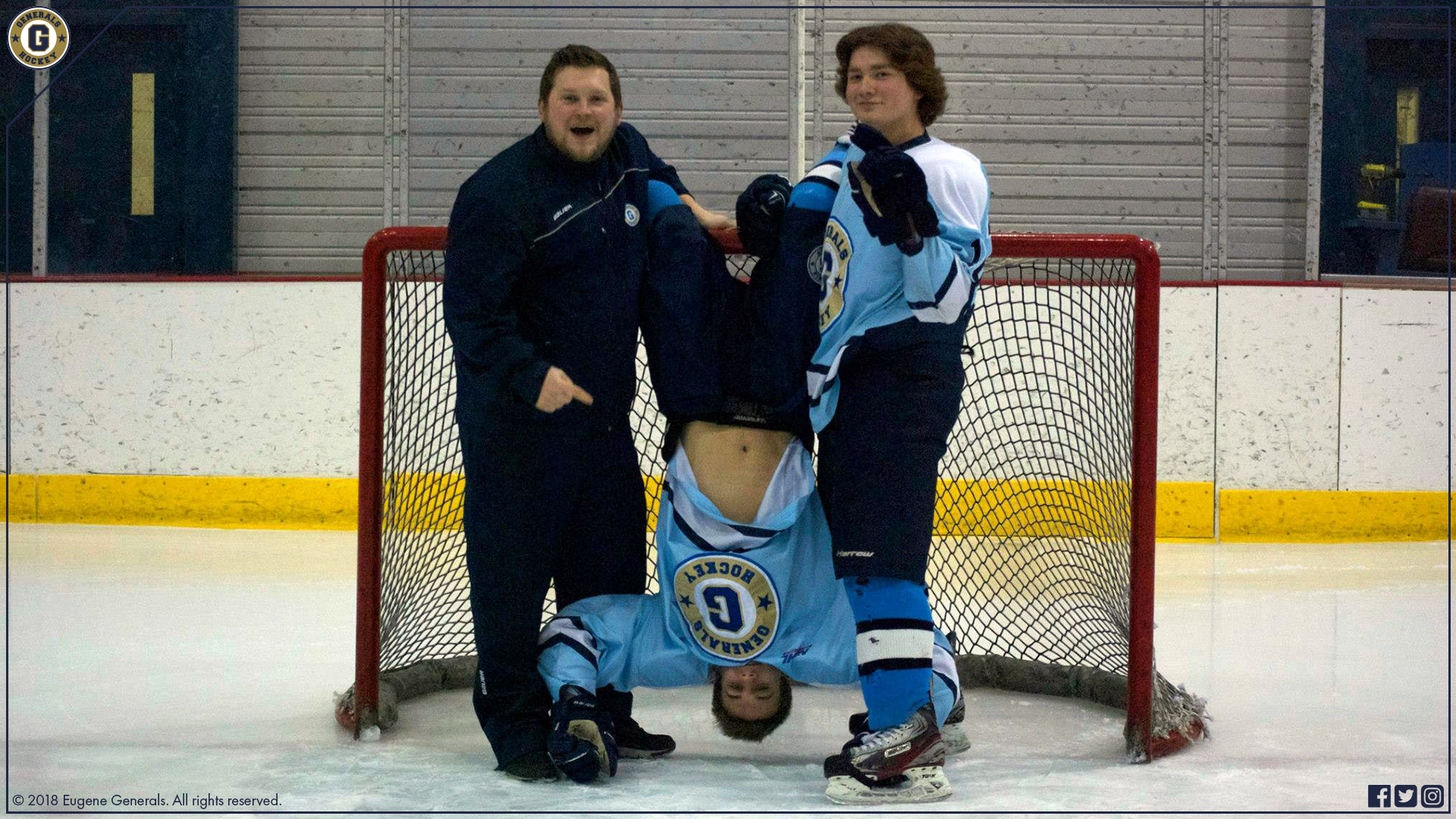 "For me, he was so much,” said Kern. “He impacted me from the first day he was here and we went through a lot together. He helped me as I took on my first steps as a head coach and he was never afraid to let me know if something wasn’t working or if the team needed something. He was a great advocate and voice for his teammates and always kept you on your toes. He would hit you with that smirk and I think everyone who knows him knows what I’m talking about. You would just know he was up to something.”

“I can’t imagine those years without him,” Kern continued. “He surrounded himself with his teammates and he would go above and beyond to ensure that they were doing ok. He was one of the first guys to try and cheer someone up if they were off. I could go on and on, but to sum it all up, Buddy was a great kid and a tremendous teammate. He is someone that I’ll never forget and losing him really hurts. We’ll miss you, Buddy.” 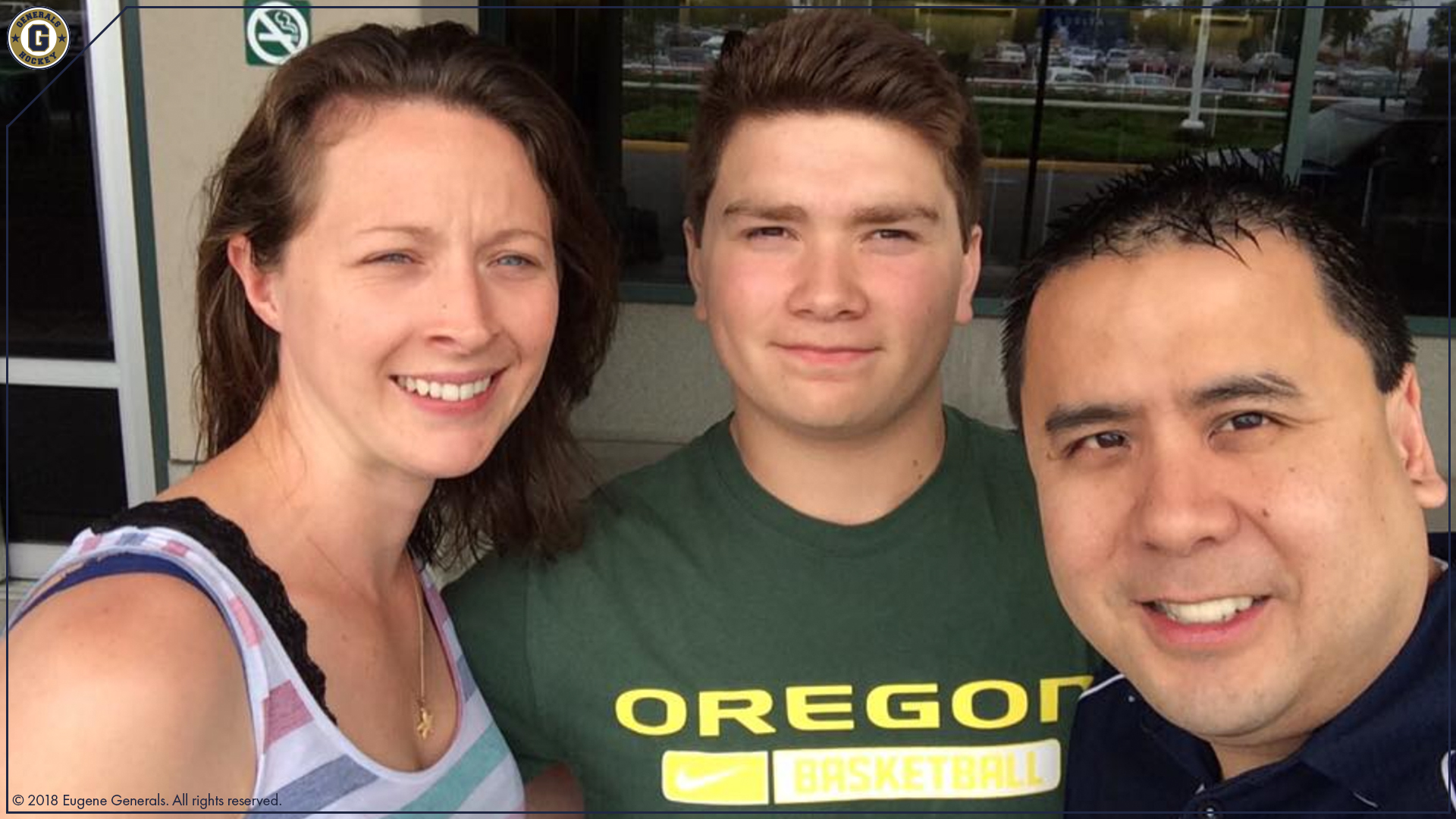 “I don’t think it’s possible to describe the sadness that has fallen upon this Generals family because that’s what people are in this town – family – and Buddy really is the personification of how family works among the Generals. He arrived here young and really grew up around the team. He’s touched not only his teammates and coaches with his charm and love for hockey, but others all around him, young and old, who to this day continue to play and love the game.”

“He shared a roof with me for three wonderful years. Cut down Christmas trees, sliced turkeys, baked birthday cakes and saw us at our happiest and, until now, our saddest moments. He made fun of everything, I mean everything, and loved life. As you could imagine, someone who shares those kinds of moments with you become family, and at his age, like your own child. We laughed like family and argued like family. But there was always love. And I will always thank him on that fateful date of making the choice to skip school and stay home (against what he knew would be my wishes). It literally saved my life.”

“His mark left on the Generals cannot be overstated. The loss of him in my life can’t be measured. I’ll miss watching him have his own family and grow old. This just isn’t what should happen. It really is a sad day for the Generals.” 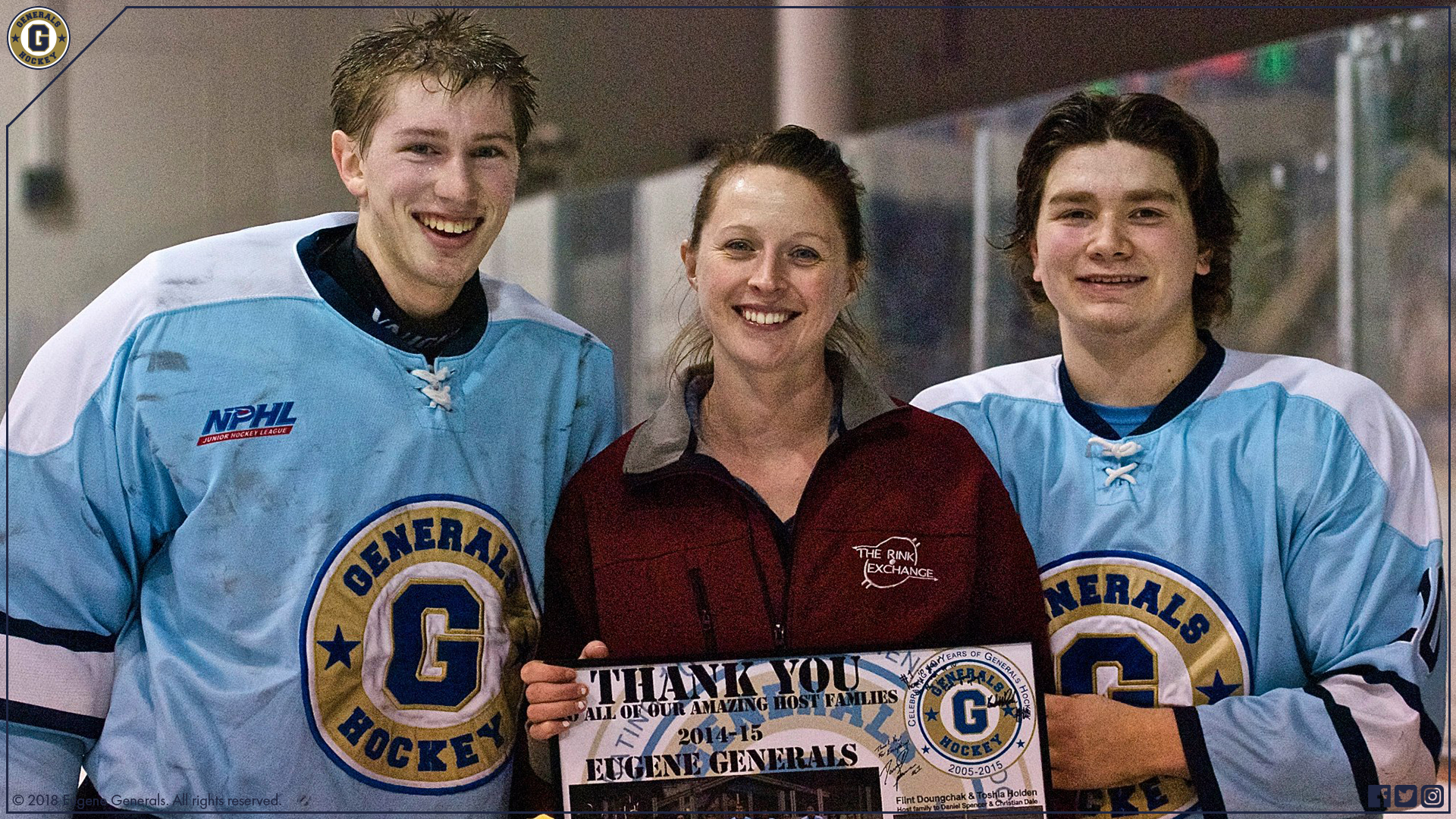 “This is a very tragic time for many of us. Christian Dale, who everyone knows as Buddy, has touched many of our lives. Many are good times, but some were and will be hard to deal with as we will only have each other to help with the closure as we will not be able to say we are sorry or even how much he really meant to us. My heart goes out to his father Vance Dale and everyone in his family.”

“For me, Buddy was like one of my own kids. I have made a choice in my life not to have my own kids, but to open my door and heart to many kids, whether they are locals who come to our facility (The Rink Exchange), those who come from all over to play for the Generals and the kids that I host with Flint in our home during the Generals season, which is typically 9 months out of the year.During those months we get to know the kids and for some we get to know their families as well.  We become a close knit family that have dinners together almost every night.Those dinners are where we get to know each other the most."

"Flint and I had Buddy in our home for 3 years, so he really became a part of our family and really touched our hearts in many ways. If I could say something to Buddy right now, it would be that I love him and that he will be missed. Thank you for making such an impact on not only my life but everyone else that you touched, Buddy.”

“I don't have any words for how devastating this is. It never seems like we have had enough time with those we lose. I sat in the same locker room as Buddy for two years, we stuck through a couple of pretty tough seasons here in Eugene and I wouldn't trade that time for anything. He truly is somebody I was happy to call brother. My wife and I will miss him deeply. #DaleHard”

“Over time, certain players emerge in your memories for whatever reason - maybe they were funny, maybe they were smart, maybe they were great leaders or maybe you just enjoyed being around them. Buddy was all of the above, and then some. The news of his passing is such a shock to the system, so heartbreaking, that even still I think that we as an organization are struggling to come to grips with it. All of us - coaches, staff, volunteers, fans, even the adult leaguers in the building - would love so, so badly to get just one more of Buddy’s patented smirks. We love you, Buddy.”

Despite being more than two years removed from his playing days in Eugene, Dale is still remembered with love and fondness in the Emerald Valley, and word of his tragic passing was a tremendous, heart-wrenching blow to the hockey community of Eugene/Springfield. Former teammates, coaches, billet families and fans all took to social media to share some of their most coveted memories of Buddy.

“Words can’t describe how much you touched everyone’s life around you including mine especially when I was missing home as a 15-year-old kid and you helped me out and got me though it and made me realize there’s nothing like junior hockey and it was so worth it.” - Chris O’Shaughnessy, former teammate

“The most family-like team I have ever been a part of. Led by our captain, our jester, our judge, and our friend Buddy. I’ll never forget the times I had with this guy.” - Isaac Vincent, former teammate

“Words can't describe the energy that you brought wherever you went and the amount of happiness that came with you. I know you’re somewhere with a hockey stick in your hand doing what you truly loved.” - Dawson Ledgard, former teammate

“Rest in peace Buddy. You'll be forever missed. My heart goes out to all your family and friends. One of the hardest to play against and one of the beauties to hang with. I'll see you again one day.” - Adam Shimamoto, former teammate

“Buddy was the first General we met when Jason and Alex started playing hockey. He was working at the rink and was easy to talk to. We got to know each other better in the days at the rink thereafter. Buddy was kind and gave Alex his first hockey stick from the Generals locker room. He always had a smile for me, even if he didn't want to, I'd get at least a little Buddy smirk you know the one!” - Lanae Falls, Generals billet parent

“I signed my son Nolan up for THFF and he was on the ice to help out with coaches. Nolan couldn’t stand on his feet and never really cared to but Buddy spent the entire hour scrubbing the ice with Nolan and Nolan had a grin ear to ear as he came off the ice. It’s truly why he’s still playing till this day and why I am a coach.” - Dan Trent, Jr. Generals coach

“Toshia Holden introduced me to Buddy Dale asking if I had a job for him. What the heck, I thought. About a week later I received my first "Buddy Smirk" and I realized he was both sides of the same coin--supremely confident and also humble and reserved. Then I saw him on the ice and, to this day, I think he may be the toughest hockey player pound for pound I have ever seen. Supremely talented, deeply caring, and always creating smiles.” - Alex Brown, Generals billet parent

The Eugene Generals organization sends its deepest condolences to the family of Buddy during this incredibly difficult time. 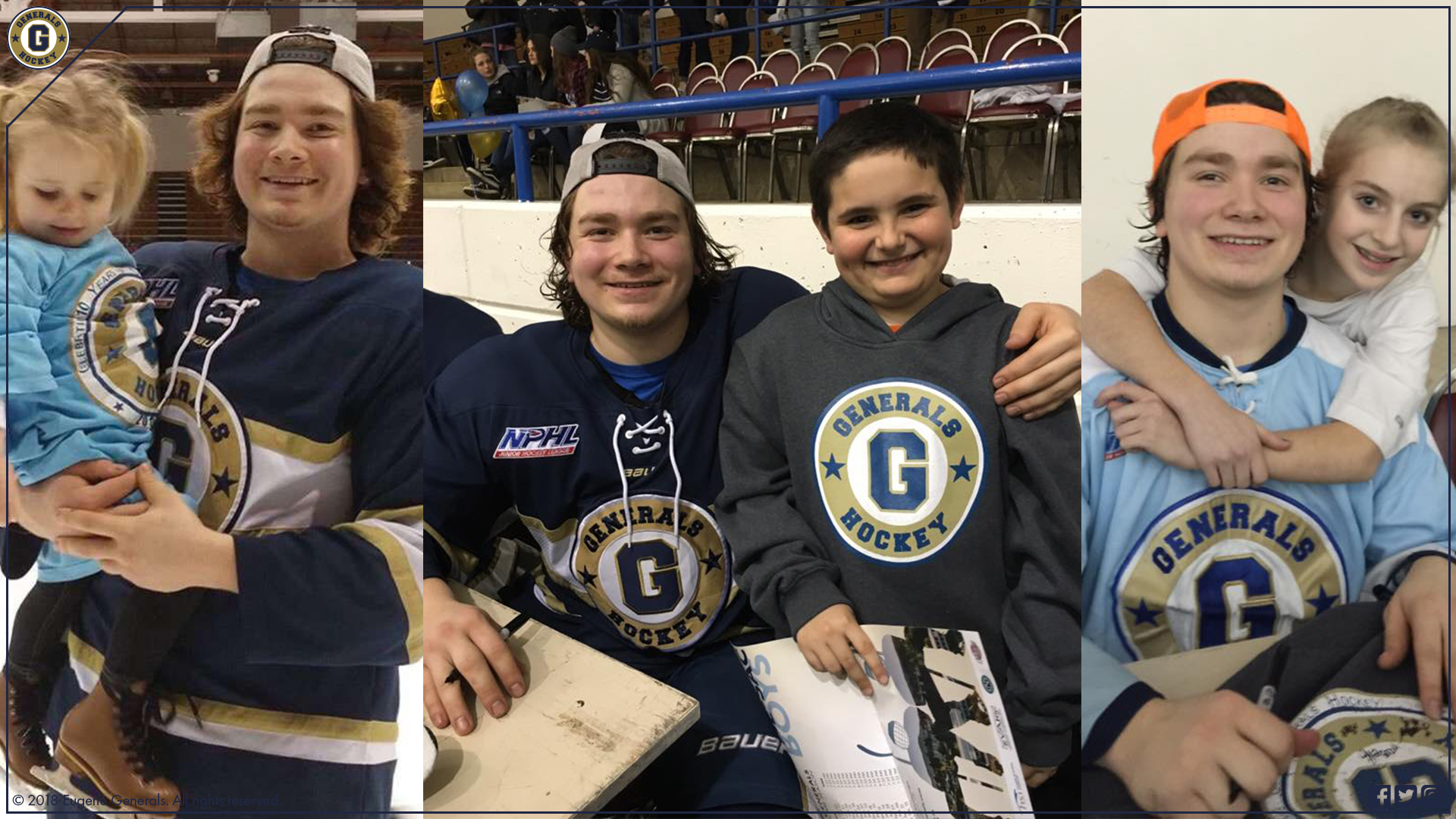