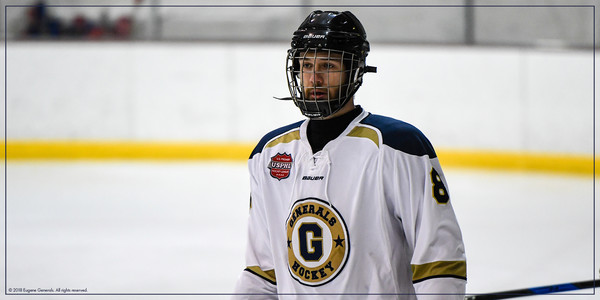 The Eugene Generals suffered a 6-3 loss at the hands of the Oregon Ducks on Saturday night in the final game of the 2017-18 season for both teams.

Playing one another for the fourth and final time this season, the Generals and Ducks faced off less than 24 hours removed from a thrilling series opener between the two teams, a 5-3 victory for Oregon.

The Ducks wasted little time to start the evening as they needed only 56 seconds to net the game’s first goal thanks to Harrison Kass who scored to give Oregon a very early 1-0 advantage.

Oregon’s lead lasted until the 12:36 mark of the first period when Alden Dupras, a Jr. Generals product who had made his junior hockey debut the night before, scored his first-ever junior hockey goal to tie the game at 1-1.

In the second period, Oregon’s Andrew Lee regained the one-goal lead for the Ducks when the midseason addition snuck a shot from a tight angle past Generals goaltender Christopher Alexakis at the 10:59 mark, but the Generals responded once more when second-year forward Frazier “Butch” Mohler pounced on a loose puck in the Oregon slot to tie the game at 2-2.

The Ducks responded emphatically by retaking the lead just 23 seconds later on Andrew Lee’s second goal of the game, and Oregon made it 4-2 ten seconds after that when Trevor Shott netted his team-leading 31st goal of the season.

Still trailing by a 4-2 margin while starting the third period on the penalty kill, Eugene cut its deficit back to one goal thanks to captain Jack Thornton who capitalized on a feed from Alex Clark after a hard forecheck to score a shorthanded goal and put the Generals back within striking distance at the 19:20 mark.

However, Thornton’s tally was the final time that the Generals lit the lamp on Saturday evening while the Ducks added two more goals in the final five minutes of regulation, both coming from Tord Strangeland, to earn a 6-3 win.

Saturday night's game concludes the 2017-18 season for the Generals, the team's thirteenth season of play. The Eugene Generals organization would like to extend its deepest thanks to all of the fans, volunteers, host families that made this another memorable season of hockey in Eugene.