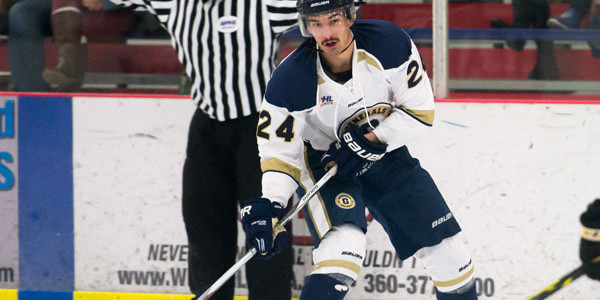 Bellingham, WA –The Eugene Generals fell 6-2 to the Bellingham Blazers in Game One of the first round of the Northern Pacific Hockey League (NPHL) Playoffs.

In the first game of a best-of-five, first round series, the Generals could not keep pace with the Blazers, who never trailed Saturday night. The Generals trail the Blazers 1-0 in the series, with the second game to be played tomorrow night at the Bellingham Sportsplex.

Bellingham started the scoring with the first two goals of the game. Brett Hanson lit the lamp at 4:51, followed by a goal from Mark Klasen midway through the period at 10:18. Austin Sabin and Karson DeRego recorded assists on the first and second goals, respectively, to propel the Blazers to a 2-0 lead.

Two minutes after Bellingham’s second goal, the Generals took advantage of a Blazers’ penalty for their first score of the game. Cody Arbelovsky recorded the power play goal at 12:22, with assists credited to Buddy Dale and Logan Sanders to trim their deficit to 2-1.

With a minute left in the first period, Hanson added his second goal of the night to help the Blazers regain the two-goal advantage. Simeon Smith provided the assist on the play, making it a 3-1 game going into the first intermission.

The second period would be defined entirely by power play goals. All four of the goals scored in the second frame were all during power plays. The first one was scored by the Generals, when Dustin Gomez fired a one-timer into the back of the net to cut their deficit to 3-2. Dale set Gomez up with the beautiful pass, coming 2:04 into the period.

The three remaining second period goals, however, were scored by the Blazers. At 5:38, DeRego capitalized on the power play with his first goal of the game, coming on an assist from Klasen to increase their lead to 4-2. Justin Sullivan tallied the next two goals, both with the Blazers on the power play. He scored at 8:28 and 16:54 to give Bellingham a 6-2 lead after the first forty minutes of action.

Neither team scored during the final period of play, leading to the Blazers securing the first game of the series. The Generals will try to win at least one game in Bellingham tomorrow night before heading back to Eugene for a game three and, if necessary, game four next weekend at the Rink Exchange.

The aforementioned Game Two of the NPHL first round series will be tomorrow night at 6:35 PM in Bellingham. Fans can keep with the playoff action on Pointstreak or Fast Hockey, and through the Generals’ Facebook and Twitter as well.