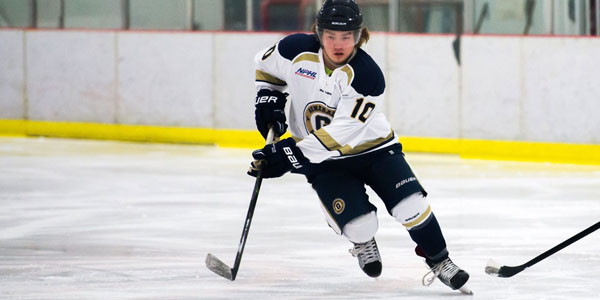 Bellingham, WA - The Eugene Generals (16-9-0-0) will travel north this weekend to face the Bellingham Blazers (21-6-1-0) in two games at the Bellingham Sportsplex.

After a seven-game home stand, combined with a two-week holiday break, the Generals will play their first Northern Pacific Hockey League (NPHL) road games since travelling to Wenatchee during Thanksgiving weekend. The Generals face the Blazers for a two-game series on Friday and Saturday night, both beginning at 7:35 PM.

Last Friday, the Generals returned to game action for the first time in almost a month. The long break did not seem to have any effect on the Generals, as they stormed out to a 5-1 lead after the first period on their way to a 10-3 win over the Tri-Cities Outlaws. Cody Arbelovsky recorded his second hat trick of the season, Buddy Dale tallied four points, and Cole Bloemer added two himself during the win.

On Saturday, the Generals broke a 1-1 tie in the second period and never looked back, as they swept the Outlaws with a 4-1 victory. Dale snapped the tie with an unassisted goal, added another one in the third period, and assisted on Bloemer’s goal for a total of seven points during the weekend.

During their winning streak, the Generals’ goaltending has been stellar, with all three goalies combining to average less than two goals per game. Chris Pritchard, Zealand Walterscheid, and Chris O’Shaughnessy have combined for a save percentage of 94.6%, while saving 193 shots in the past six games.

Bellingham, meanwhile, is on a short week after playing games Sunday and Monday. Facing the Wenatchee Wolves with a chance to tie them for first place in the NPHL, the Blazers lost the first contest in overtime 4-3, then were shutout 2-0 the next game. Despite scoring just three goals in those two games, the Blazers still boast one of the league’s best offenses, averaging 5.14 goals per game.

For Eugene to slow down the Blazers’ potent offense, they will have to stop some of the league’s top scorers. Karson DeRego leads the NPHL in points with 51, while Simeon Smith and Sam Vizenor rank third and fourth with 40 and 39 points, respectively. Forward Justin Sullivan is also near the top at sixth with 34 points, and has the most power play goals in the league with six.

In their first 28 games this season, the Blazers have evenly split the playing time in goal between Christopher Alexakis and Broderick Parker. Alexakis owns the league’s highest save percentage at 94.8%, while Parker ranks fifth at 91.8%. Alexakis and Parker have had success against the Generals this season, with each goalie allowing three goals in two starts against Eugene.

Friday and Saturday will be the last regular season meeting between the Generals and Blazers in Bellingham. The two teams will square off again for a two-game series in Eugene next month on February 12th and 13th.