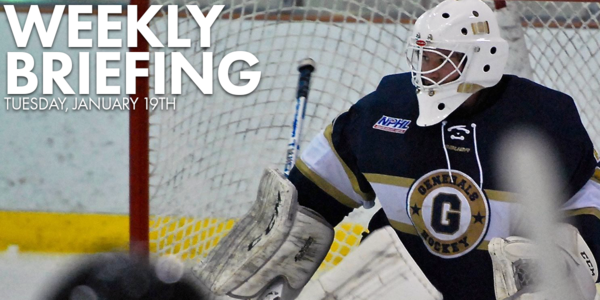 The Generals' winning ways continued in the new year as the team’s winning streak reached six this past weekend after a two-game sweep of the visiting Tri-Cities Outlaws at The Rink Exchange.

Entering 2016 feeling well rested and rejuvenated after the holiday break, the Generals showed no signs of rust on Friday as they opened up the series with a 10-3 drubbing of the Outlaws. On Saturday, despite falling behind early to the Outlaws, the Generals responded with four unanswered goals to pick up a 4-1 win and cap off their second sweep of the Outlaws this season.
Friday, January 15th: Generals - 10, Outlaws - 3

On Friday, it took less than a minute for the Generals to get on the board as captain Christian “Buddy” Dale lit the lamp less than a minute into the game to give his team a 1-0 lead in front of the home crowd. After the Outlaws responded to tie the game three minutes later, the Generals would go on to score four goals in the final 16 minutes of the period to take a commanding 5-1 lead after twenty minutes.

With the two sides trading goals in the second period, the Generals carried a 7-3 lead into the final frame, and they put the game on ice with three more goals in the third period to wrap up their eighth victory by five or more goals this season. Starting goaltender Christopher Pritchard finished the game with 37 saves while Dale finished with a game-high four points (two goals, two assists) and Cody Arbelovsky notched a hat trick, his second hatty of the season.

Saturday, January 16th: Generals - 4, Outlaws - 1
Despite being undermanned and overmatched on Friday, the Outlaws came out firing on Saturday night and eventually took the game’s first lead with just under twelve minutes gone in the first period. The lead would be short-lived, though, as less than four minutes later, Cody Arbelovsky scored his fourth goal of the series after a beautiful backhand feed from Dustin Gomez to tie the score at 1-1.
Into the second, the Generals would take their first lead of the evening after a Cole Bloemer forecheck forced an Outlaws turnover that Dale quickly capitalized on, and the captain weaved his way past three Outlaws skaters before beating Outlaws goaltender Jimmy Grosklaus at his near post for the goal.
Dale would get another early in the third period to extend the Generals lead up to 3-1, this time from point-blank range thanks to another fantastic forecheck (this time by Josh Hawn) and a perfect feed from Isaac Vincent.
The Generals would cap off the scoring midway through the final period, this time with plenty of good luck on their side, as Dale’s centering pass from behind the net took a deflection from Bloemer, and somehow snuck between the legs of Grosklaus and just barely over the line for Eugene’s fourth and final goal of the night.
With the two-game series sweep, the Generals improved to 5-1 vs. the Outlaws this season (3-1 at home, 2-0 on road) while fourteen different players tallied at least one point over the two-game series.
New Additions Are A Perfect Fit
This past weekend also marked the home debuts of a pair of new Generals, defensemen Kenneth Griffin and Morgan Neal.
Griffin, formerly a player and student at Phillips Academy, joined the Generals after the holiday break and quickly found his new teammates to be warming welcoming. “Personally,” remarked Griffin,” I was very surprised with the sped in which I was able to build relationships and chemistry with the guys on the team. All around, it’s a great group of guys that made it very easy to quickly become a part of the team."
Neal, who had some previous experience with the team after attending this season’s Main Camp and also playing with the Generals for a road series this past December. “Everyone on the team really brought us in and made us feel at home and like we’ve been playing together the whole season,” said Neal, “and I think that made a big impact on last weekend’s games."
Looking forward, the two both expressed loads of excitement when talking about the second half of the season and the challenges that await. “I was super excited to get back into the swing of the hockey season,” continued Neal, “and I was ready to challenge myself to catch up to the guys. I think there were things that could have gone better in the games, but that’s life. You can always get better at something."
“More than anything,” added Griffin, “I’m extremely excited and proud to be on the ice representing the Generals."
Big Test vs. Blazers Looms
The Generals winning streak will be put to the test this weekend as they head North for a two-game weekend series vs. the second place Bellingham Blazers, whom the Generals are winless against this season. Blazers Head Coach Mark Collins’ squad continues to have the Generals' number, posting a perfect 4-0 record over Eugene so far this season while holding the Generals offense to just five goals over that span.
However, Generals Head Coach Justin Kern believes that his squad is as ready as ever to take that next big step and prove to the rest of the league, and perhaps to themselves, that the Generals belong in the Cascade Cup conversation.
“Frankly, we’re a different team now than we were at the beginning of the season,” said Kern. “We’ve evolved and grown tremendously as a squad throughout this season, we’re as healthy as we’ve ever been, and the recent additions of Griffin and Neal certainly help strengthen our blue line as well.”
The Generals and Blazers face off on both Friday and Saturday at the Bellingham SportsPlex with the puck scheduled to drop at 7:35pm for both games. You can watch a live video broadcast of this weekend's NPHL matchups on FASTHockey.com or follow live stats on Pointstreak.
NPHL Roundup
Every NPHL team will be in action this weekend as the race for the playoffs begins to heat up. Here's the slate of games this weekend in the Northwest:
Friday, January 22nd
West Sound Warriors vs. Tri-Cities Outlaws
Where: Toyota Arena - Kennewick, Washington
When: 7:05pm
Saturday, January 23rd
Wenatchee Wolves vs. Seattle Ravens
Where: Kent Valley Ice Center - Kent, Washington
When: 6:35pm
Tri-Cities Outlaws vs. West Sound Warriors
Where: Bremerton Ice Arena - Bremerton, Washington
When: 7:35pm
Sunday, January 24th
Seattle Ravens vs. Wenatchee Wolves
Where: Town Toyota Center - Wenatchee, Washington
When: 2:35pm
Find the full leage standings at NPHLonline.com. You can watch a video broadcast of every game on FASTHockey.com or follow live stats via Pointstreak.
Remember to follow the Generals on Facebook and Twitter for updates, highlights, and behind-the-scenes content throughout the season. Visit EugeneGenerals.com to purcahse tickets to the next Generals home game on Thursday, January 28th at 6:05pm as the Wenatchee Wolves come to Eugene for just the second time this season.