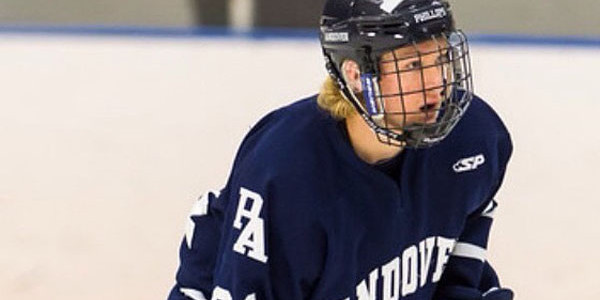 The Eugene Generals are proud to announce Kenny Griffin has officially joined the team.

Originally from Sterling, Alaska, Griffin joins the Generals as they continue their playoff push during the last half of the regular season. A 17 year-old defenseman, Griffin adds even more depth along the blue line for the Generals, who hope to reach the Northern Pacific Hockey League (NPHL) playoffs for the tenth time in franchise history.

Griffin previously attended Soldotna High School in Alaska, then went to the prestigious Phillips Academy in Andover, Massachusetts. When Griffin heard great things about the Generals from his god brother, he was intrigued by the idea of playing hockey in Eugene.

Coincidentally, Griffin’s god brother happens to be on the current roster: defenseman Logan Sanders, who is from Wasilla, Alaska. The two have known each other for pretty much all their lives, and have remained close friends to this day.

“Logan and I have known each other since we were babies. Our parents have been family friends for a long time; his parents are my godparents, my parents are his godparents. We’ve always got along well and enjoyed each other’s company.”

Surprisingly, this is the first time Griffin and Sanders have ever played on the same team. Nevertheless, Griffin is excited about joining his god brother on the blue line for the Generals.

“We’ve actually never played hockey together,” said Griffin. “We always played against each other all the way through high school. This is the first time we have ever been on the same team, and I’m really looking forward to play alongside Logan in Eugene.”

Despite being a defenseman, Griffin also has plenty of experience at forward. Starting hockey as a forward, the Alaska native has gone back and forth between the two positions, though he is glad to be playing defense once more.

“Growing up, I always played forward,” illustrated Griffin. “When I started playing peewees, my coaches decided to give me a try on defense and I really enjoyed it. As high school hockey came around, I would play forward sometimes if the coaches needed me to. I’m just really happy to be playing on the blue line again.”

Griffin, who turns 18 this Monday, began practicing with his new team Thursday morning. In the short time he has been in Eugene, Griffin is already enjoying practices with his new teammates and coaches.

“I’ve loved practice so far,” raved Griffin. “There’s a lot of flow, great pace, and zero standing around which is a nice change. You are always moving around, which for me is great.”

Talking about what he does well on the ice, Griffin says his greatest asset on the ice is his speed and utilizes that quickness on the offensive end as well.

“I’m somewhat of an offensive defenseman,” Griffin elaborated. “I like to rush the puck when I get the chance. I pride myself on making a good breakout pass, and that’s something I’ve always been a stickler about. I’m my own worst critic, so I know if I mess up, I’ll be on myself to improve the next time around.”

Griffin also discussed what he hopes to achieve during his time in Eugene. “Obviously it’s always nice to win games. Aside from that, I want to get my name out there and see what I can do to help further my hockey career.”

In terms of furthering his hockey career, Griffin acknowledges the lure of potentially playing college hockey in the future. “College hockey is always the goal for most youth and junior players, so that’s definitely a possibility. There’s also the thought of playing Tier I junior hockey somewhere. I’m just going to keep my options open and see where it leads me.”

Generals Head Coach Justin Kern is excited about how Griffin can solidify an already effective group of defenseman.

“Kenny is a really strong defenseman," Kern asserted. "I think he’ll bring another edge to our defensive capabilities, and help us move the puck out of our zone and with our transition game. He’ll keep a lot of shots away from our goalies which is always a benefit.”

Seeing Griffin up close for the first time in practice Thursday morning, Assistant Coach Daniel Gomez was impressed with what he saw in the team's newest player.

“Based on drills we’ve done, he has a lot of on-ice awareness," explained Gomez. "I’m curious to see how his habits affect how we move the puck in the defensive zone and shut down the other teams’ top forwards.”

Griffin will wear the number 14 in his first game action with the Generals on January 15th and 16th. The Generals host the Tri-Cities Outlaws for a two-game series at the Rink Exchange next weekend, their first games of 2016. Tickets are available online at eugenegenerals.com.