Generals Victorious in Last Game of 2015 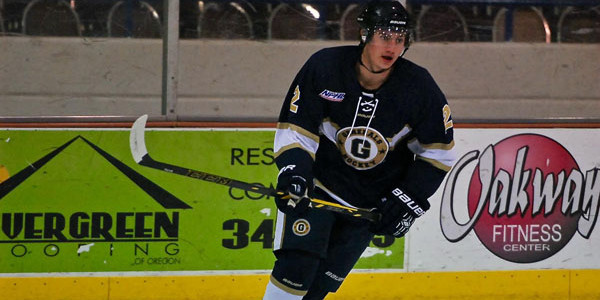 In their last game before the Christmas break, the Generals ended the 2015 calendar year on a high note by winning their fourteenth game of the year, one more than all of the 2014-15 season.

Wearing their zombie-themed jerseys in support of the team’s 1st Annual Blood Drive, the Generals came out firing in front of one of their largest crowds of the season. Eugene outshot Seattle 39-29, scoring six times on their way to their fourth straight victory.

Josh Hawn started the scoring spree in the first period, when he connected on a pass from Dustin Gomez at 11:55. Logan Koski of Seattle tied the game at one when he scored six minutes later at 17:54 for the team’s first and only goal of the night.

A thirteen-second span in the second period helped the Generals to a 3-1 advantage going into the final intermission. At 3:28 of the period, Gomez recorded his first goal of the evening, while Isaac Vincent followed suit at 3:41. Jack Geisler assisted on Vincent’s goal.

The third period belonged to the Generals, who scored three times from three different players. Vincent lit the lamp on the power play at 7:46, thanks to assists from Cody Arbelovsky and Buddy Dale. Arbelovsky then scored at 10:48 on a pass from Gomez for the team’s fifth goal of the contest. Gomez concluded the game by going coast-to-coast with the puck and scoring the team’s sixth and final goal.

Playing in his first game since shutting down the Wenatchee Wolves on December 10th, Generals goalie Chris Pritchard once again allowed just one goal in the team’s final game of 2015. He saved 28 of 29 shots Saturday night, the fifth time this season Pritchard has given up one goal or fewer in a game this season.

There is still time to get ahold of one of the one-of-a-kind zombie jerseys The Generals are currently holding a Zombie Jersey Auction online, where fans can bid on individual player jerseys. The auction lasts until Tuesday, December 22nd, so do not miss out on the chance to purchase one of the zombie jerseys.

With the players returning home for the holidays, the team will have about two weeks off before reporting back to Eugene for the duration of the 2015-16 season. The Generals play their next game Friday, January 15, 2016 when they host the Tri-Cities Outlaws at the Rink Exchange.

The Generals would like to thank everyone who participated in tonight’s great cause, as well as the Lane Blood Center and Health and Safety Institute for making the 1st Annual Blood Drive night a success.