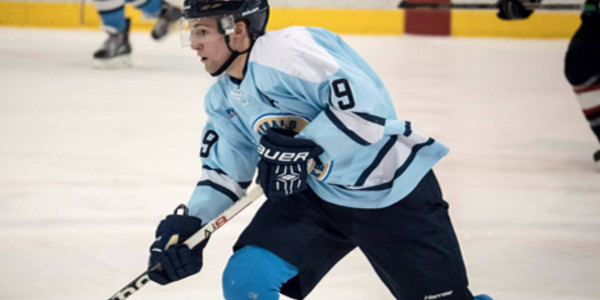 Eugene, OR. -The Eugene Generals have tabbed former player Daniel Gomez as their new assistant coach.

Prior to joining the Generals as a player, Gomez previously played for other junior hockey teams in the Northwest. He spent time with the West Sound Warriors and Southern Oregon Spartans, located not far from his hometown of Central Point, Oregon.

Coaching is something that Gomez has always wanted to do. With his junior hockey recently coming to an end, he now looks forward to helping younger hockey players develop their skills, which he did a little bit of while in high school.

“When I was in high school, helping out with the younger age groups was one of my favorite experiences,” Gomez remembers. “I look at coaching as a chance to give back because people did it for me and now I get to do the same for the next generation of Generals.”

Now that he has the chance to coach and develop a new generation of players, Gomez will try to help a Generals team who failed to reach the playoffs a season ago. He realizes that while hoping for success this season, there will also be a learning curve to adjust to in becoming a coach for the first time.

“This year, there is going to be a lot of learning for me to do,” Gomez admitted. “The on-ice practices and workouts will be an easier transition than the front office tasks, only because I got to see those sides when I was playing.”

“The biggest skill I have picked up is leadership,” acknowledged Gomez. “As a leader, it is your job to always ensure the people under you, whether they be Marines or hockey players, have all the tools to assume their role when it’s their time.”

Aside from leadership, Gomez also believes his time with the Marines will help out the team not just on the ice, but off the ice as well.

“Off-ice training will definitely be influenced by the kind of workouts I learned,” Gomez explained. “When we do physical training in the Corps, such as long runs or buddy carries, it's all team-centered. It’s going to be fun, but it’s also going to push the players to the limit.”

Generals Head Coach Justin Kern had nothing but positive things to say about his former player who will now be joining him on the coaching staff. “I’m very excited to have Daniel as the assistant coach,” Kern expressed. “I know I can teach him a lot and I can still learn from him as well.”

Kern also added how Gomez’s dedication and experience in the Marines will benefit the Generals in multiple ways.

“Having someone with a Marine background will help push the players that extra step in practice and workouts,” commented Kern. “Daniel’s the kind of person who will put his life on the line not just for his country, but also his teammates, family, and friends. I’m really happy to have that dedication on the team.”

Gomez is looking forward to recruiting a great group of players once Main Camp for the Generals starts. Generals Main Camp runs from August 15-17 at the Rink Exchange, where the roster for the team’s eleventh season will be determined.

For more information:
Ryan Colby
Director of Public Relations
Eugene Generals
This email address is being protected from spambots. You need JavaScript enabled to view it.
541-359-4154 (office)
425-233-0890 (cell)