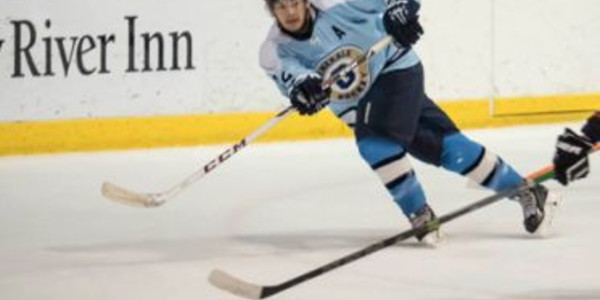 Eugene, OR. - Former Eugene Generals Forward Jared McDaniel has committed to and will play hockey at Finlandia University in Michigan.

McDaniel is the latest member of the Generals to agree to play for the Finlandia Lions. Goalie Daniel Spencer recently announced his commitment to attend there as well.

From Phoenix, Arizona, McDaniel began his junior hockey career with the Generals in 2013 after playing for the Premier Scorpions in his home state. He will now join Spencer in Hancock, located in the Upper Peninsula of Michigan, and wear the blue and white for Head Coach Dane Litke.

During his two years with the Generals, McDaniel made his presence known with his leadership, versatility, and durability. Named an assistant captain during the 2014-15 regular season, McDaniel played in all but one game out of a possible eighty-three games in two seasons, including playoffs. His eighty-two games played over the last two seasons is the most by any Generals player over that span.

After playing his first season as a defenseman on the blue line for the Generals, McDaniel then transitioned to the forward position in his second year. His transitioning to the wing helped increase his offensive productivity, accumulating ten more points than the previous season.

Finlandia, a private university, is a part of NCAA Division III, operating in the Northern Collegiate Hockey Association (NCHA). The NCHA is a ten member league, with teams located throughout the Midwest region in Michigan, Wisconsin, Minnesota, and Illinois.

In a phone interview on Wednesday, McDaniel talked about what ultimately led to his decision to attend school all the way in Michigan. “Finlandia has a good hockey program and [Assistant Coach] Matt Marchel talked to me about the admission process,” McDaniel explained. “It’s a good school for me to focus on my major.”

Majoring in Criminal Justice, McDaniel has some grand aspirations for what he wants to be doing after school, none of which include anything on the ice. “I plan on going to the police academy and become a policeman,” McDaniel affirmed. “Hopefully I can further my career in Criminal Justice to be on the SWAT team or possibly a detective.”

McDaniel has also been talking with his once more teammate Spencer every day. The two will be visiting the Finlandia campus on April 30th, and both of them will begin school in August.

Generals Head Coach Justin Kern is excited about another Generals player getting the opportunity to play at Finlandia. “I’m really happy to see a blue collar player like Jared get the chance to play at the Division III level,” expressed Kern. “Jared isn’t the kind of player who is going to score a goal every shift, but he will kill any penalty you need killed and take care of business every shift he gets.”

Coach Kern also commented about McDaniel’s personality and how he will be an asset to his new team. “He is a really fun player to coach and brings a great sense of humor with everything he does,” articulated Kern. “I think Jared will do great there.”

The Eugene Generals wish Jared McDaniel all the best as he pursues his hockey career and education at Finlandia University.