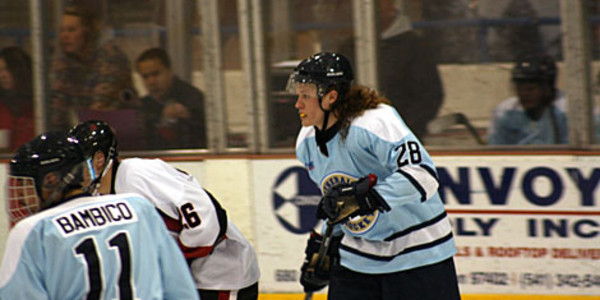 EUGENE, Ore. - The Eugene Generals (15-20-1) will host the Bellingham Blazers (32-5-0) for two games at the Rink Exchange Thursday and Friday night.

Last weekend, the Generals and Blazers were supposed to play two games against each other in Eugene. Travelling along I-5 last Friday, however, the Blazers got stuck in Salem and did not reach Eugene until midnight; thus, Friday’s game was rescheduled for Thursday night at 7:35 PM.

Fans who had tickets for Friday, February 7th’s game can use that ticket for any of the four remaining home games for the Generals, including this Thursday or Friday. Fans can exchange their February 7th tickets at the Generals’ ticket office for one on any of the home games.

Despite the game being postponed Friday, Saturday night’s contest went on as planned. The Generals and Blazers were competitive throughout the game, until Bellingham pulled away with three third period goals to win 6-1. Bellingham were successful on three power plays, including two after an odd sequence of events that saw the Blazers have a five on three advantage.

The two games this weekend are the last two between the Generals and Blazers this regular season. The Generals will close out their regular season with two home games against the Tri-Cities Outlaws, which will have serious playoff implications for the four playoff-bound teams.

No matter what, the Generals are guaranteed to finish in third or fourth place while the Blazers are assured first or second. With the West Sound Warriors breathing down the Blazers’ necks and the Outlaws being tied with the Generals, the upcoming two games are very important to both teams. The Generals and Outlaws have the exact same record at 15-20-1 with 31 points apiece; due to their 5-2-1 head-to-head record, the Generals own the tiebreaker and are currently in third place in the NPHL standings.

Bellingham is also looking to further increase their momentum going into the NPHL Playoffs. The Blazers have won eighteen consecutive games with their last loss dating back to November 27th.

Tickets for Thursday and Friday are available at the Generals’ ticket office or online at eugenegenerals.com. EGHN will broadcast both games online with coverage beginning fifteen minutes before the puck drops; Alex Stimson will serve as host for both games.