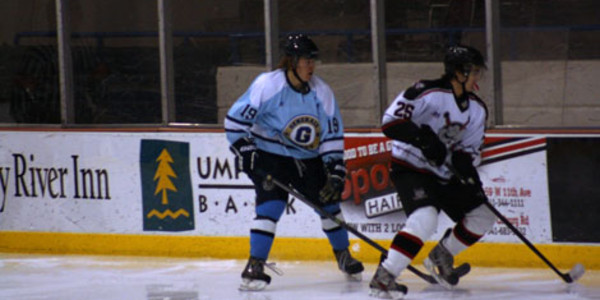 With tonight's win, the Generals secured third place in the NPHL; the team owns the potential tiebreaker against the Outlaws based on their head-to-head record. The Generals will play the West Sound Warriors in the first round of the NPHL playoffs.

The Outlaws started the scoring with two first period goals at 8:29 and 15:10. Austin Mayton connected on the first goal from Aaron Questad while Questad had a unassisted goal of his own to put the Outlaws up 2-0.

The Generals responded next with two goals to tie the game at two apiece going into the first intermission. Matt Walton scored on an assist from Evan Carter at 15:53 and Ben Sera lit the lamp at 19:02. Hunter Hartman and Kyle Ruchas assisted on Sera's score.

In the second period, Connor Bambico took the lead for the Generals with a power play goal at the 14:12 mark. Connor Hoernlein recorded an assist on the successful power play.

Tri-Cities answered with their own power play goal at 17:40 to tie the game at three. Sheldon O'Neill connected on his first goal of the night, which was assisted by Mayton and Questad.

With both teams tied at three going into the third period, the Generals broke the stalemate at 3:25 to take a 4-3 lead. Dans Berzanskis recorded his first goal of the game on a beautiful pass from Hartman.

Cody Anderson of Tri-Cities connected on a power play goal at 18:08 to put the Outlaws within striking distance. Despite the late score, the Outlaws could not force overtime, thus ensuring their fourth place position going into the playoffs.

Tomorrow night's game will be the regular season finale for the Generals. Fan Appreciation Night will also be tomorrow night at 7:35, with free giveaways throughout and a free poster to the first 300 fans. Fans can also get player autographs and skate with the players after the conclusion of tomorrow night's contest.