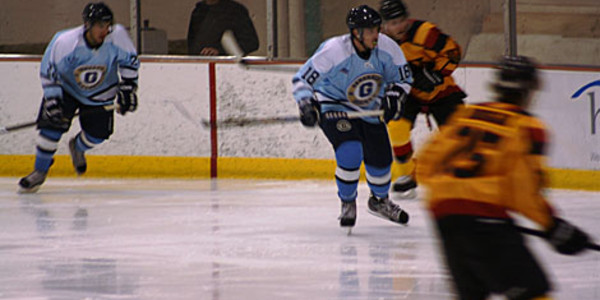 BREMERTON, Wash. - In Game One of the NPHL Semifinals, the Eugene Generals (0-1) lost 4-1 to the West Sound Warriors (1-0) in Bremerton, Washington.

Down 1-0 in the first round of the playoffs, the Generals will play Game Two tomorrow night at 7:35 and try to avoid being down two games to the Warriors in this best-of-five series.

Power plays and penalties were the story of the night as four of the five goals in tonight's game were scored on power plays. In sixty minutes of play, there were a combined 92 penalty minutes between the two teams, including 68 in the second period alone.

The Warriors quickly took advantage of their power play opportunities, scoring on their first two chances with the extra man. Peter Mingus had both of the power play goals, coming at 4:44 and 7:18 into the first period. Joe Glithero assisted on both scores while Jimmy Morgan and Brantt Heble each provided an assist on the power plays.

After spending much of the first period being on the penalty kill, the Generals took advantage of a five-on-three by connecting on their first goal of the postseason. Evan Carter recorded the power play goal, at the 8:22 mark, on assists from Matt Walton and Daniel Gomez.

With two Generals' players in the penalty box, the Warriors were able to add their third power play score of the night, this time from Morgan, with just 1:49 remaining in the second period. Mingus and Glithero assisted on the five-on-three advantage.

After committing a penalty on a power play opportunity, the Generals allowed the Warriors to score 3:36 into the final period on a four-on-four, the first such goal of the game not on a power play. Morgan connected on his second goal of the postseason, once again from Mingus and Glithero, who had assists on all four Warriors' goals.

Despite losing by three goals, there are some silver linings to take away from tonight's game. When not spending time on the penalty kill, the Generals played West Sound evenly and had some shot opportunities that did not go the team's way. The Generals also had twenty-seven shots on goal, with sixteen in the second period.

Game Two of the Semifinals of the NPHL Playoffs will be played tomorrow night at 7:35 in Bremerton, Washington. Fans in Eugene can tomorrow's game live at the Rink Exchange absolutely free; fans can come to watch the 7:35 playoff game and enjoy free food as well.