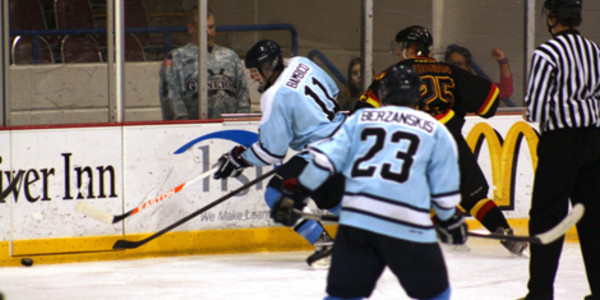 EUGENE, Ore. - The Eugene Generals (0-3) were eliminated from the playoffs Friday night with a 4-1 loss to the West Sound Warriors (3-0) in Game Three of the NPHL Semifinals.

The Warriors will move on to the NPHL Finals to face the Bellingham Blazers, who defeated the Tri-Cities Outlaws in three games as well.

As for the Generals, the players will be returning to their homes, thus concluding the team's ninth season.

In the first period, the Warriors scored early on for the only goal in the frame. At 2:39, Jimmy Morgan connected on his fourth goal of the best-of-five series, with assists to Ivan Bondarenko and Max McInnis.

The second period was full of action in the last half, including penalties and both sides, a goal, and even a penalty shot. After a Generals' hooking penalty, Gavin Nickerson gave West Sound a 2-0 lead with a power play goal at 14:11 on an assist from Adam Moon. The Generals had a chance to trim their deficit with a penalty shot attempt from Connor Hoernlein at the very end of the period, but could not convert on the opportunity.

Less than two minutes into the third period, Taylor Rose scored at 1:55 to increase their advantage to three goals. Morgan and Thomas Puetz assisted on Rose's goal.

The Generals, though, would not go out quietly as they scored a shorthanded goal at 3:43 to put themselves within reach of West Sound. Hunter Hartman, the team's captain and leading scorer, recorded the shorthanded goal, with the assist being awarded to Dans Berzanskis.

West Sound would get an insurance goal on a power play when Bondarenko converted for his first score of the night. Morgan and Joe Glithero recorded assists on the successful power play, coming at the 16:05 mark.

From here, the Generals will take a break to prepare for the team's tenth season. In the upcoming weeks and months, the team will reevaluate their roster and scout new players to fill the holes from those who are leaving the team.

Season nine would not be possible without the support of fans, volunteers, host families, sponsors, players, and coaches. On behalf of the Generals, the team would like to thank everyone for their support of the best hockey in Eugene, Oregon.