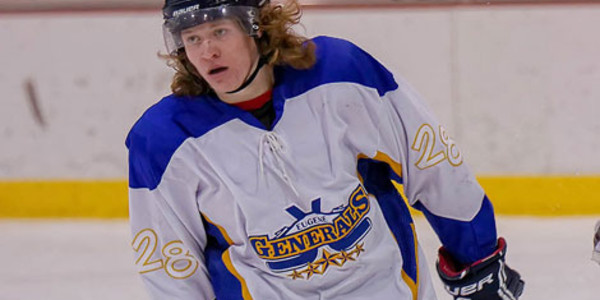 Tonight, Hartman tied, and then broke, Adams’ record by earning a PPA on three of the Generals’ four power play goals. Hartman now has 23 PPA, and there are still nine games to be played this season.

In the fist period, the Generals did not give up a penalty, and neither team was able to put points on the scoreboard.

The Generals took full advantage of the power play opportunities they where presented with in the second period; scoring three power play goals.

Connor Hoernlein scored the Generals first goal on a power play 0:48 into the second period. Hartman earned his first PPA of the night on Hoernlein’s goal.

Connor Bambico lit the lamp minutes later, at 5:24 of the second period, on a power play. Matthew Walton and Hartman were given a PPA for their contribution on Bambico’s goal.

The Nationals scored two consecutive goals before the second period let out. Glacier received a goal from Daniel Roe at 9:52, and Jordan Carter scored on a penalty shot at 13:35 of the second period.

The third period was filled with a tug-a-war of goal scoring, as each team battled for the lead.

Jackson Schoeder tied the game 3-3, by scoring a goal for the Nationals 9:16 into the third period.

Hoernlein scored his second power play goal of the night 9:52 into the third period. Hartman received his third PPA of the night on Hoernlein’s goal, which allowed him to set a new PPA record for the Generals.

Nationals leading scorer Tucker Spooner tied the game 4-4 at 13:35 of the third period.

Spooner’s goal was the final goal of regulation, which sent the final matchup this season between these teams to overtime.

The Generals put the game away 1:24 into overtime, when Soloway scored the game-winning goal. Hartman earned his fourth point of the night by assisting Soloway on his goal.

The Generals will play the Vancouver Vipers on the road on Friday, before returning to Eugene to host the Vancouver team at 7:35 p.m. on Saturday.