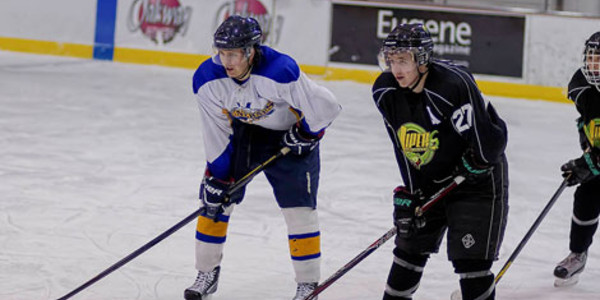 EUGENE, Ore. - The Eugene Generals (18-12-0-1) will play the Vancouver Vipers (2-29-0-0) on the road this Friday, before returning to Eugene on Saturday to host the Vipers for the final time this season.

Saturday’s game is being held at the Lane County Ice Arena at 7:35 p.m.

The Generals have struggled as a team more in the month of January than they have in any other month this season. Eugene started this month off by losing five consecutive games, but have begun to rebound; winning three of their last four games.

January has given a few players on the Generals an opportunity to excel, while the team’s top scorers remained stagnant for much of the month. In the nine games Stephen Soloway played this month, he has managed to register 14 points (eight goals, six assists). Two of Soloway’s goals this month are recorded as the game-winning goal. An even more surprising emergence this month is 16-year-old Connor Hoernlein, who collected five points (two goals, three assists) in 10 games this month. Hoernlein’s personal game has developed tremendously this season, as he has more than doubled his point total from last year.

The Generals will still be looking to Hunter Hartman, Zak Johnson and Connor Bambico to help lead the team in scoring this weekend.

In the seven contests this season, the Generals have outscored the Vipers 53-21. Eugene will attempt to continue this tendency in their upcoming games against Vancouver.

A troubling trend that the Generals are working to solve has been goaltending. In January, the Generals’ goaltending has collectively produced a 6.10 goals-against average and a .845 save percentage.

If the Generals can establish themselves in the offensive-zone, and receive quality goaltending in each game, then Eugene should walk away from this weekend with two wins.

The Generals will broadcast Saturday’s game live on the Eugene Generals Hockey Network (EGHN). The EGHN broadcast is hosted by Alex Stimson, and will being approximately 15 minutes before the drop of the puck.