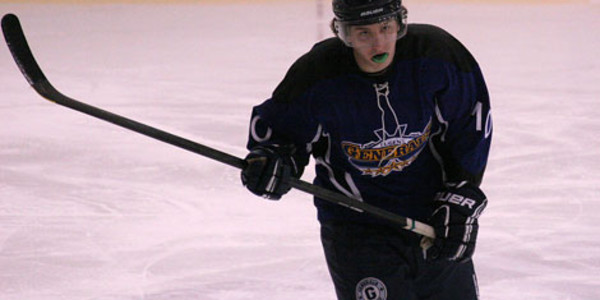 The Generals played the Vipers for the final time of the season tonight, and finish with a 7-1 record against the Vancouver team.

Eugene’s newest member, Joe Herda, got his fist start in net tonight. Herda had a 92.86 save percentage, and stopped 13 pucks on 14 shots.

Converting 60 percent of their power play opportunities, the Generals’ special teams were on fire tonight.

Zak Johnson started off the scoring for the Generals by lighting the lamp on the power play at 9:22 of the first period.

Hunter Hartman scored the Generals second goal by collecting a rebound in front of the net and putting it around the Vancouver goalie’s far side. Hartman’s goal was scored at 17:15 into the first period.

The Generals scored three consecutive goals in the second period before the Vancouver could put a point on the scoreboard.

Stephen Soloway scored the Generals third goal by shooting a puck off the crossbar and having it drop behind the Vancouver goaltender. Kyle Ruchas scored the Generals fourth goal on the power play, and Matthew Walton scored an unassisted goal to give Eugene a 5-0 lead midway through the second period.

The Generals scored two insurance goals in the third period to give them a 7-1 lead, when Johnson and Walton scored their second goals of the night.

The Generals will be on the road next week, as they travel north to take on the Bellingham Blazers.