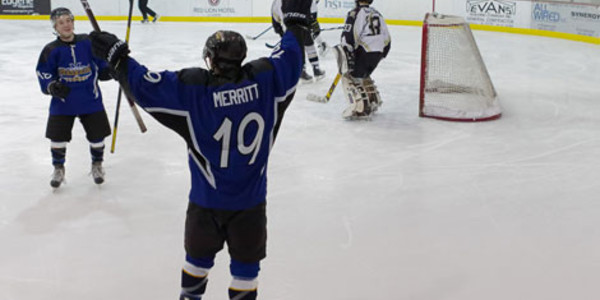 Eugene’s recently acquired goaltender, Christopher Boyd, was given his first start tonight. Boyd made 47 saves of 52 shots, had a 90.4 save percentage and recorded 60:00 minutes of ice time.

Eugene looked strong in the first period; leading the Blazers 2-1 after the first 20 minutes of play.

Merritt scored the Generals’ first two goals of the game at 5:05 and 14:14 of the first period. Merritt’s first goal was unassisted, and Zak Johnson earned one point for assisting Merritt on his second goal.

Cody Rich, the Blazers’ biggest offensive threat, scored Bellingham’s only goal of the first period at 19:38.

In the second period, the Blazers scored three consecutive goals before the Generals could slow their momentum by scoring one of their own.

Bryce Kenning, Mickey Turner and Kyler Moore each scored one goal for the Blazers in the second period. Turner’s was an unassisted, shorthanded goal and Moore lit the lamp on the power play.

Merritt recorded his hat trick by scoring a shorthanded goal at 15:49, which put the Generals in a one point deficit. Joshua Arnold and Robert Speer, two of the new players acquired by the Generals this week, assisted Merritt on his third goal.

Eugene and Bellingham exchanged goals in the third period, but the Generals would fall short.

Moore put the Blazers up 5-3 by scoring his second goal of the night at 10:51 of the third period. Moore’s goal was unassisted.

Connor Bambico scored the Generals’ final goal of the night at 18:53 of the third period. Bambico was unassisted.

The Generals have not beaten the Blazers since Nov. 16, but will look to do so tomorrow night when these two teams play for the final time this season.