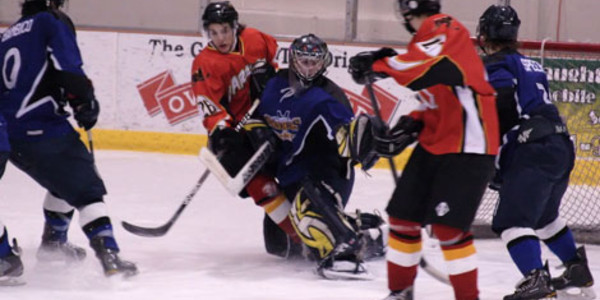 Friday night’s game is Fan Appreciation Night, where the Generals will take time to thank all who have attended games over the course of the season. There will be numerous giveaways for fans showing spirit and support of the Generals during the game.

With playoffs starting March 5, one last win against the West Sound team could be the momentum boost the Generals will need to make a deep playoff run.

When West Sound arrives in Eugene on Friday, the Generals will have to be on high alert; the Warriors are without a doubt the most lethal team in NORPAC.

West Sound is home to two of the three top scores in NORPAC. Kai Wilkins, 116 points (35 goals, 71 assists), and Josh Twietmeyer, 76 points (34 goals, 42 assists), lead the Warriors in scoring, and have had ample scoring success when they skate with the Generals.

The Generals have plenty of weapons to counter the Warriors offensive, which has been apparent in past contests.

This hockey season, the Generals have relied heavily on Zak Johnson; 67 points (33 goals, 34 assists), Hunter Hartman; 65 points (22 goals, 43 assists), Connor Bambico; 54 points (17 goals, 37 assists), and Matthew Walton; 49 points (11 goals, 38 assists), to put points on the scoreboard. Although the Generals have seen plenty of other players step up and score in pivotal situations, the team cannot escape the fact that these four players account for more than 50 percent of the team’s scoring.

Earlier this month, the Generals swept the Warriors for the second time this season. A key reason this happened is due to the acquisition of seven new players. Two players, Christian Merritt and Matthew Hopersberger, were instrumental to the Generals sweep of the Warriors. In the two games they played, Merritt scored five points (three goals, two assists), which included a game-winning goal, and Hopersberger recorded three (two goals, one assist).

Goaltender Christopher Boyd gave the Generals some of the best goaltending they have seen all season in his two starts against the Warriors this month. Boyd produced a .910 save percentage, and walked away with two wins. More importantly, Boyd elevated his level of play as the game clock worked its way to expiration, which secured his wins.

The Generals will look to win their third consecutive game against the Warriors come Friday night.

Fans that cannot make it to the game are encouraged to watch the game via the Eugene Generals Hockey Network (EGHN). Coverage of EGHN will begin at 7:20 p.m., and is hosted by Alex Stimson.