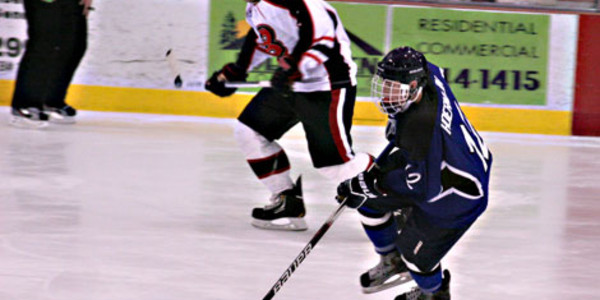 EUGENE, Ore. - The Eugene Generals (25-14-0-1) are scheduled to play the Bellingham Blazers (22-16-1-1) in Game One of the semifinal round in the Northern Pacific Hockey League’s (NORPAC) playoffs.

The playoff system in NORPAC is a best of five game series. The Generals, the No. 2 seed, will have home-ice advantage during the first round of the playoffs.

The two teams are scheduled to play in Eugene on Tuesday night at 7:35, Wednesday at 6:35 and, if necessary, Sunday at 5:35. The Generals will be playing in Bellingham, Wash. on Friday 7:35 p.m., and Saturday at the same time if necessary.

At the beginning of the season, the Generals appeared to be the more dominant team. However, as the season progressed, the Blazers proved to be a formidable opponent.

Bellingham is the only team the Generals have a losing record to; they are 4-5 when playing the Blazers. For three months this season, the Generals could not muster up the effort needed to defeat the Blazers. In their last meeting of the season on Feb. 9, the Generals narrowly escaped with a 7-6 overtime win.

Given the history this season between these two teams, this playoff series is completely up in the air, and the team with the most grit and determination will get a chance at winning the Cascade Cup.

In prior meetings, the Generals counted on Connor Bambico, Hunter Hartman and Zak Johnson to lead the team to victory. Bambico poses as a threat from the point, and can make offensive rushes up the ice, which has proven to be lethal. Hartman has been the Generals most valuable player on the power play this season; posting five power play goals and three power play assists in nine games against the Blazers. Johnson, the Generals leading scorer with 69 points (34 goals, 35 assists) this season, will be looking to light the lamp on each shift.

However, it was the accusation of Christian Merritt that may have been the difference maker in the last weekend series against the Blazers. In two games, Merritt posted an astonishing seven points (five goals, two assists) against a team that Eugene had been struggling with for months.

The Generals finish the regular season with the best power play in NORPAC. Eugene had a 30.77 power play percentage, an impressive 9.53 percent better than Bellingham’s. However, each team has a stout penalty kill, and power play goals will not come easily for either team.

Bellingham will look to exploit the Generals defense and goaltending with the skill sets provided by Cody Rich and Mason Wade. With 90 points (34 goals, 46 assists) this season, Rich is NORPAC’s second leading scorer, and he will look to be the leading scorer in the postseason. Rich also is tied for the leagues leading shorthanded scorer, therefore the Generals power play unit will have to pay special attention to him while on the man-advantage. Wade, the leagues fifth leading scorer, with 66 points (22 goals, 44 assists) will be looking to distribute the puck to open teammates when not shooting on net.

The Generals will likely look to start Christopher Boyd in net, but it will be a game-time decision. Boyd has a 5-1 record, 3.92 goals-against average and .908 save percentage since being acquired in early February.

Playoff tickets are $10 for adults, $6 for students and seniors, and children under the age of five are free. Tickets can be purchased at the door or online.

If you cannot make it to the game, you can always watch the game on line via the Eugene Generals Hockey Network (EGHN). Coverage of EGHN will begin at 15 minutes before the drop of the puck.