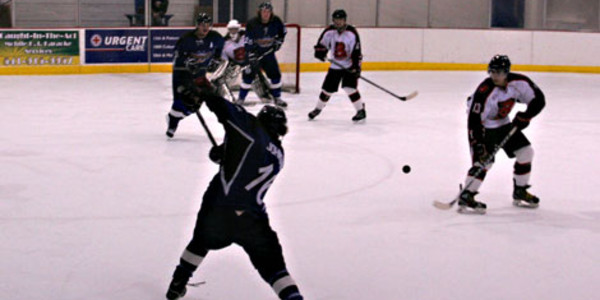 In a best-of-five series, the Generals are not in a must win situation, but after tonight’s loss the Eugene squad will be feeling pressure going into tomorrow night’s 6:35 game.

Eugene committed several costly penalties tonight that the Blazers capitalized on, which altered the outcome of tonight’s events. If a lesson is to be taken from tonight’s game, it is that discipline is key in playoff hockey.

The Generals wasted little time tonight to find the back of the net, but it was the Blazers that found it when it was most needed.

It took the Generals 38 seconds to light the lamp in the first period. Zak Johnson scored the Generals first goal of the postseason, and was assisted by Robert Speer and Connor Bambico.

The Blazers scored back-to-back goals; taking a one goal lead midway through the first period. Bellingham received an unassisted goal from Derek Davis and a power play goal from Gerin Hohl.

Eugene tied things up shortly after Bellingham took the lead, when Johnson scored his second consecutive goal of the night at 11:13. Johnson was assisted by Christian Merritt and Kyle McKibbin.

Both teams battled hard in the second period, and after the 40 minutes of play the score read 3-3.

Bellingham took their second lead of the night when Cody Rich scored his team’s second power play goal at 18:04 of the second period.

Josh Arnold evened things up for the Generals by scoring a one-on-one, shorthanded goal at 18:55. Robert Speer assisted Arnold on his goal.

There was no scoring in the third period, which forced the game to go into overtime.

Davis scored the game-winning goal at 5:57 into the first period of overtime after being assisted by Kyle Neith.

The Generals will host the Blazers again tomorrow night at 6:35 for Game 2 of the semifinal round of playoffs. Coverage of the game will be provided by the Eugene Generals Hockey Network.