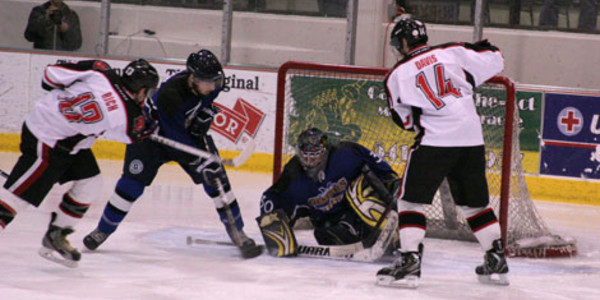 EUGENE, Ore. - The Eugene Generals announce the recipients their 2012-13 Player Awards at last night’s General banquet, which was held at the Lane County Ice Arena.

Each year, the Generals are proud to reward seven players, a host family and volunteer with an award and recognition for their contribution to the team’s overall success.

This year, veteran defenseman Connor Bambico was the recipient of three of the player awards. Bambico was awarded Most Valuable Player, Best Defensive Player and the Player’s Choice Award. This season, Bambico had 54 points (17 goals, 37 assists) in 36 games. Proving his value to the Generals, Bambico has won an award in each of the four seasons he has played with the Generals.

After being acquired by the Generals at the trade-deadline, Josh Arnold stepped up in ways that were not seen prior to his arrival. The tenacious, determined Arnold was given the Bobby Freeland Golden Hard Hat Award; an award given to a player always shows up and never gives up. In his seven games played in a General uniform, Arnold recorded one shorthanded goal, two shorthanded assists and two game-winning goals.

Zak Johnson received the Best Offensive Player Award. Johnson posted 69 points (35 goals, 35 assists) in 38 games this season. Over the course of the season, Johnson went on two six-game and one seven-game point streak. He also had three separate five-point nights this season.

Hunter Hartman was awarded Rookie of the Year. Hartman set a new organization record for the Generals by earning 26 power play assists. He finished the season with 65 points (22 goals, 43 power play assists), four game-winning goals and sixth in the race to lead the Northern Pacific Hockey League in scoring.

Dr. Garreth MacDonald was the recipient of the Norma J. Evans Volunteer of the Year Award. Dr. MacDonald acts as the team’s head athletic trainer, and has done so for several seasons. Volunteering his time to the Generals, Dr. MacDonald is behind the bench at every game.

The Host Family of the Year Award was given to Jayne Detering. The award is given each year to the host family who best exemplifies support of the player, team and organization. Detering has been the director of player housing for the past seven years, and housed four players this season.

Within the week, many of the players will return to their respective homes.