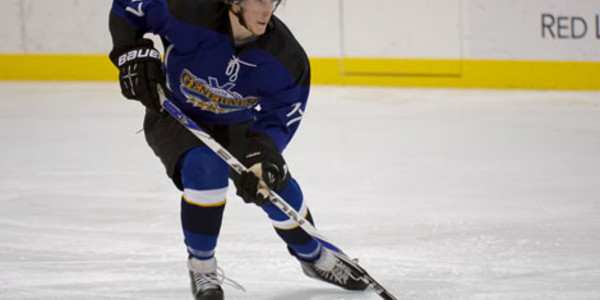 The Generals scored their three goals in the first period and held the Nationals scoreless for 44:00 of the game.

Cody Andersen was the first player to get the Generals on the score-sheet tonight. Andersen scored an unassisted, wrap-around goal 1:43 into the game.

The Generals went up by two goals when Kirby Carlson redirected a shot from Peter Martin in front of the net. Martin and Julian Herrera each recorded an assist on Carlson’s goal.

In the fifteenth minute of the game, Randy Ludwig and Herrera were streaking down the ice towards the Nationals net. Ludwig, the man with the puck, delayed passing the puck to Herrera and got the Nationals goaltender to commit to Ludwig’s side of the net. Ludwig, being one of the Generals most skilled players, waited to see the goalie present him with an excellent scoring opportunity. Herrera parked himself on the far side of the net. Ludwig then passed Herrera the puck, and Herrera drove the puck into the back of the net, lighting the lamps.

The Nationals received two consecutive penalties in the third period, putting the Generals on a 5-on-3 power play. However, the Generals were unable to take advantage of this scoring opportunity, allowing the Nationals to kill each penalty.

Glacier was forced to wait until the third period before they were able to score their first goal.

The final score of the night’s game was 3-1 Generals.

For more information:Jackson Phillips, Director of Public Relations and Volunteer Coordinator, Eugene GeneralsThis email address is being protected from spambots. You need JavaScript enabled to view it.(541) 359-4154 Ext. 207 (office)(510) 862-7174 (cell)