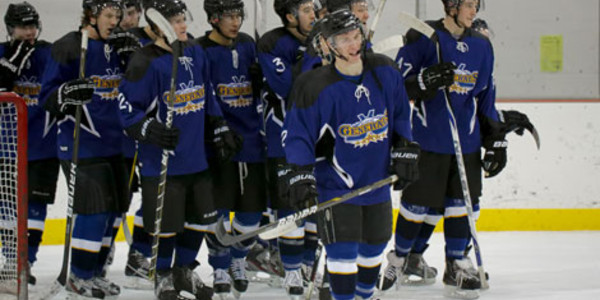 After losing last night in Seattle, the Generals rebounded nicely in tonight’s matchup.

The Generals found themselves in scoring deficit late in the game, but showed hockey grit and scored two goals in the last minute of game regulation to win.

Chris Videto started out the scoring for the Generals tonight. Videto scored the first goal of tonight’s game 9:30 into the first period. Kirby Carlson and Mikio Minobe were each awarded an assist on Videto’s goal.

After scoring a goal, Warriors forward Kai Wilkins got his team on the scoreboard 10:44 into the period.

Generals defenseman Connor Bambico scored a goal at 15:24, giving his team the lead going into the second period.

In the second period, the Warriors scored two goals to give themselves the lead.

Warriors players Yanick Gross and Josh Twietmeyer each scored a goal in the second period.

By the end of the second period, the Warriors would be leading the game 3-2.

In the third period, Brian Farkas scored a goal for the Warriors giving his team a 4-2 lead.

The Generals remained out of the scoring department for much of the period, until Julian Herrera found a way to get the puck into the back of the net. Herrera scored his first goal of the evening 16:05 into the third period. The goal was Herrera’s second goal in two games.

The Generals, down by two goals, pulled their goalie to give themselves an extra man on the attack.

The high-risk coaching decision was deemed a success when Generals defenseman David Bechard tied the game at 19:14 in the third period.

Riding the momentum of Bechard’s goal, Kirby Carlson scored the game winning goal seven seconds later at 19:21 in the period.

The Generals will play the West Sound Warriors again, tomorrow night at 7:30 p.m.