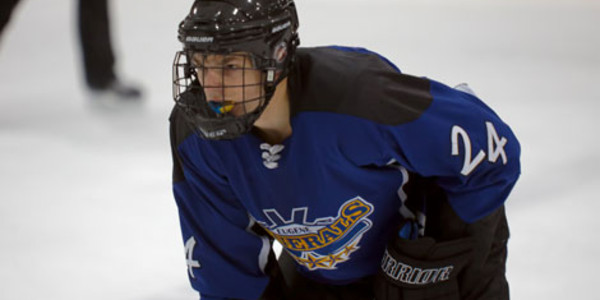 For the second night in a row, the Generals found themselves in a goal deficit going into the third period. However, with their backs against the wall, the Generals have over come adversity to find victory at the end of each game.

The Warriors scored two quick, back-to-back goals at the start of the first period.

The goals came from Kai Wilkins at 3:34 and MacKenzie Crews at 4:34 of the first period.

Generals forward Christian Merritt scored his teams first goal of the night at 9:52 of the period. Merritt’s goal was assisted by team leading scorers Randy Ludwig and Kirby Carlson.

West Sounds scored once more before the end of the period.

The Generals had masterful defense in the second period.

In the second period, the Generals did not allow a single shot on net from the Warriors, and managed to bombard the Warriors net with 20 shots in the period.

Of the many shots fired on net in the second period by the Generals, only one shot from Julian Herrera found its way into the back of the net.

In the third period, the Warriors wasted no time to score a goal, but the Generals showed perseverance and out scored West Sound.

Yanick Gross was the lone Warriors player to score in the third period. His goal came 0:12 into the period and was assisted by Logan Mueller.

In the last 10:00 of regulation the Generals scored four goals.

Kirby Carlson, Herrera, Connor Bambico, and Justin Huelsman each scored a goal in the third period.

Bambico received the game-winning goal 16:10 into the game.

The Generals managed to win two of their three games on their road trip, and swept the Warriors in this weekends matchups. The Generals will make their trip back to Eugene tomorrow, and will begin to prepare for next weekends game.