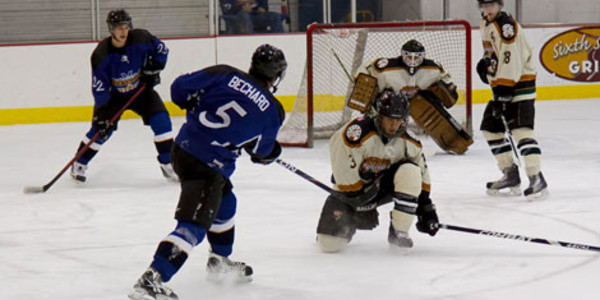 Tonight’s contest between the two teams contained three fights, three penalty shots and 11 goals, which was plenty to keep the crowd on their feet and cheering for their home team.

Peter Martin and Cody Andersen assisted Julian Herrera in scoring the night’s first goal. Martin took a shot from the point and Herrera deflected Martin’s shot past the Glacier goalie to light the lamps on the power play.

On the Generals next power play, Zak Johnson and Martin worked together to score the night’s second goal. After being passed the puck from Martin, Johnson shot the puck at the top of the circle in the slot and into the back of the Glacier net.

“Carter asked me to drop the gloves and I figured why not,” said Edwards in a post game interview. “There are no hard feelings between us. We both wanted to go, and fighting is part of the game.”

The second period would be a firestorm of goals.

Johnson received his second power play goal of the night 1:52 into the second period. Kyle Kennedy passed the puck to Johnson, who fired the puck on net. Johnson’s shot deflected off the stick of a Nationals player and found its way into the back of the net: giving the Generals a three point lead.

The Nationals then caught wind in their sails and found a way to light the lamp.

Over the course of five minutes in the second period, the Nationals received goals from Tucker Spooner, Danny Roe and Michael Noe.

With 1:53 left to play in the second period, Generals forward Kyle Kennedy left the game with an undisclosed lower body injury.

Anderson scored his first goal, and second point, of the night at 19:34 of the second period.

The three goals scored by the Generals made it impossible for the Nationals to earn the come-from-behind victory.

The Generals will take a holiday break, and their schedule resumes Jan. 6, when the team travels to Seattle.

For more information:Jackson Phillips, Director of Public Relations and Volunteer Coordinator, Eugene GeneralsThis email address is being protected from spambots. You need JavaScript enabled to view it.(541) 359-4154 Ext. 207 (office)(510) 862-7174 (cell)