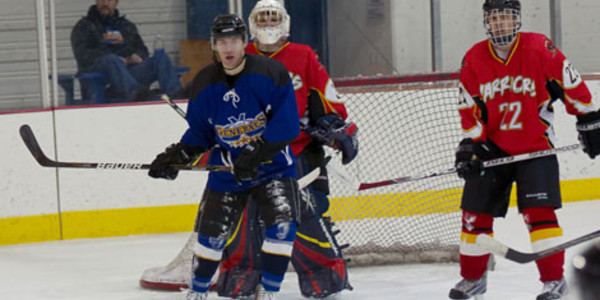 The Generals have won five consecutive games when playing the Warriors this season.

Generals defenseman Aaron Ward scored on a wrist shot that was taken from the high slot. Wards goal beat the Warriors goalie high on his blocker side 10:05 into the first period.

Christian Merritt scored after shooting the puck from behind the net and having the puck deflect off the Warriors goalie's back. The deflected puck crossed the goal-line, giving the Generals a 2-0 lead 18:08 into the first period.

The Warriors scored their first goal of the night after the Generals defense lost a battle in front of the net. After hacking his stick at the puck like a madman, Mike Byers pushed the puck past Gabriel Mier y Teran and into the back of the net 19:09 into the first period.

In the second period, the Generals showcased their ability to score while shutting out their opposition.

Bambico recorded his first goal of the night on a wrist shot that placed the puck in the back of the net. Bambico lit the lamp 7:06 into the second period.

After a battle along the boards, Merritt shot the puck at the net. The Warriors goalie made the initial save, but Julian Herrera collected the rebound and lit the lamp 17:43 into the period.

Bambico scored his second goal after receiving Justin Huelsman's centering pass from behind the net. Bambico's goal was recorded 19:55 into the second period.

The Generals put the game away in the third period.

Joe Edwards scored the Generals sixth goal of the evening after freezing the Warriors goalie and then going five-hole. Edwards’ goal was recorded 6:19 into the third period.

Warriors Alternate Captain Kai Wilkins walked the puck from behind, to the front of the net before wristing the puck into the back of the net. Wilkins scored the Warrior's final goal of the night 12:22 into the third period.

Merritt passed the puck across ice from behind the net to Bambico, who one timed the puck into the back of the net. Bambico’s goal solidified the hat-trick as well as the Generals win.

The Generals will play the Warriors at the Lane County Ice Arena tomorrow night at 7:35. If you cannot make the game you can always enjoy it online on the Generals’ EGHN broadcast.