Generals One Game Away From The Sweep 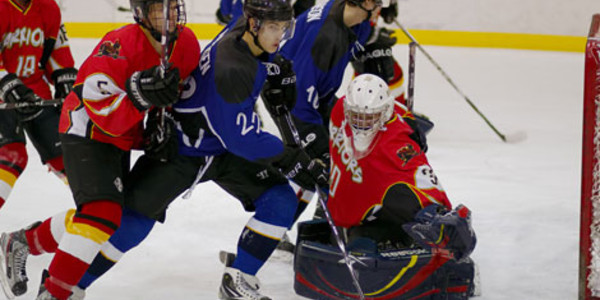 The Generals remain undefeated against the Warriors this season.

Generals Team Captain Christian Merritt opened the scoring department tonight. Merritt’s goal came from a breakaway opportunity that resulted in a wrist shot that was high on the Warriors goalie’s blocker side. His goal was recorded 3:51 into the first period.

West Sound player Trey Holt evened the scoring by lighting the lamp 8:22 into the first period.

Matt Hopersberger sniped the West Sound goalie 10:20 into the first period. Hopersberger’s goal gave the Generals the lead going into the second period.

In the second period, West Sound would be the first team to strike.

Warriors player Kai Wilkins passed MacKenzie Crews the puck from the point. Crews, who was parked on the side of the net, taped Wilkins’ pass into the back of the net, which gave his team a much needed goal.

Generals forward Randy Ludwig scored on a beautiful backhanded shot that was placed over the leg pad of the West Sound goalie. Ludwig’s goal was recorded 12:37 into the second period.

The third period was dominated by the Generals, as they shutout the Warriors in the period.

After shooting high glove side, and finding the back of the net, Hopersberger scored his second goal of the night at 9:26 of the third period.

Kirby Carlson collected a leg save rebound that was given up by the Warrior’s goalie, and dumped it into the back of the net; giving the Generals their final goal of the game 18:26 into the third period.

The Generals will play the Warriors again tomorrow night at 5:35.