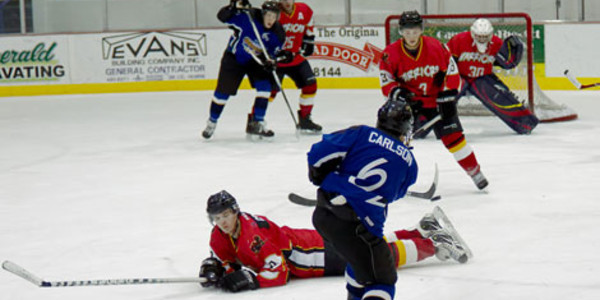 The Generals finished their season series aginst the Warriors 7-0.

Generals forward Matt Hopersberger opened up the scoring depratment tonight, as he scored his third goal in two nights. Hopersberger scored after out deeking the Warriors goalie and shooting the puck between his legs to light the lamp.

Generals forward Randy Ludwig scored on a wristshot taken from the low slot. Ludwig's goal was recorded 17:46 into the first period.

The Warriors were the only team to light the lamp in the second period.

West Sound player Trey Holt parked himself in the slot and wristed the puck into the back of the net 8:29 into the second period.

The third period was dominated by the Generals and Merritt.

Merritt scored his first goal of the period off of a beautiful pass made by Ludwig. After breaking down the left side of the ice, Ludwig passed the puck, through traffic, to Merritt who one-timed the puck past the glove of the Warriors goalie. Merritt's goal came 5:04 into the third period.

Ludwig assisted Merritt on his second goal of the night too. Ludwig passed Merritt the puck from behind the net, and Merritt one-timed the puck over the leg pad of the Warriors goalie 12:24 into the third period.

Merritt recorded his final goal of the eveneing after sniping the top-shelf of the goal. Merritt's goal was recorded 13:13 into the third period.