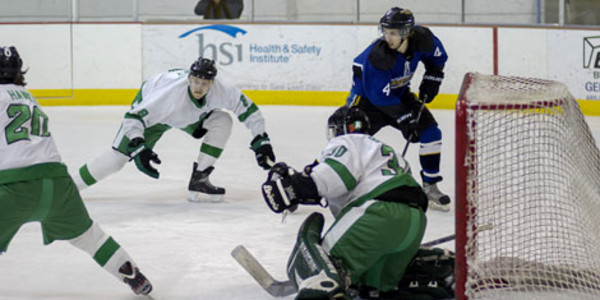 After tonight’s game, the Generals locked up the No. 4 seed in the playoffs, which will begin this Friday.

The Generals were the first team to open the scoring department tonight.

Seattle’s Cameron Hoffman streaked down the left side of the ice and cut to the net, which allowed him to dump the puck past the leg-pad of Generals goalie Brad Robertson. Hoffman’s goal came 19:11 into the first period.

The second period belonged to the Totems.

Parker Eliot collected a Eugene turnover in front of the net. Wrapping the puck around Robertson, Eliot placed the puck into the back of the net 1:04 into the second period.

Generals power forward Kyle Kennedy returned to the ice tonight after missing several games this season due to an undisclosed injury.

On Kennedy’s first shift of the second period, he dropped the gloves with a Seattle’s Kristian Ophus to give his team a spark to get them back into the game.

In a postgame interview, Kennedy stated, “It felt good to get back out on the ice.”

In the third period, the Generals had an opportunity to tie the contest late in the game. The Generals scored twice with less than 3:00 in the game, but both goals were waved off.

The Generals will play the Vancouver Victory in the first round of the playoffs on Friday at 7:35 p.m.