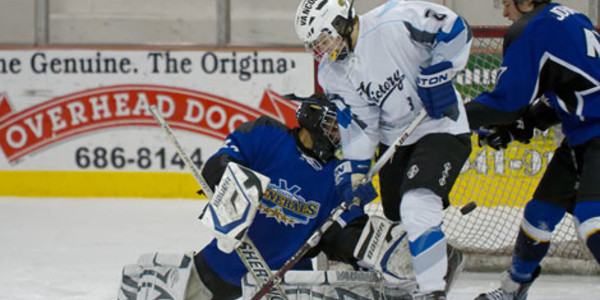 EUGENE, Ore. - The Eugene Generals suffered a 3-2 loss to the Vancouver Victory in game one of the first round of the playoffs.

Eugene is in a must win situation after tonight's loss, because the first round of the playoffs are a best of three game series.

In tonight's game, both teams were held scoreless until the third period.

In the first period of tonight's game, Generals forward Connor Bambico suffered an undisclosed injury, and he would not return to the game.

There was no scoring through the second period.

Generals winger Chris Videto was the first player to light the lamps tonight. After streaking up the right side of the ice, Videto let loose with and rocketed the puck into the back of the net with a heavy slap shot. Videto's goal came 2:09 into the third period.

Generals forward Justin Huelsman scored the Generals final goal of the outing 8:14 into the third period. Huelsman's goal was scored from a backhanded shot that went top-shelf.

Victory player Cam Calloway scored a shorthanded goal that was redirected in front of the net 13:01 into the third period.

Joe Hoover tied the game after puck-handling the puck around Generals goalie Brad Robertson. Hoover's goal was recorded 14:31 into the third period.

Kade King scored the game winning goal at 19:38 of the third period. King scored on the short side, after he popped the puck over the leg blocker of Robertson.

The Generals will host the Victory in game two of the first round of the playoffs tomorrow at 7:35 p.m.