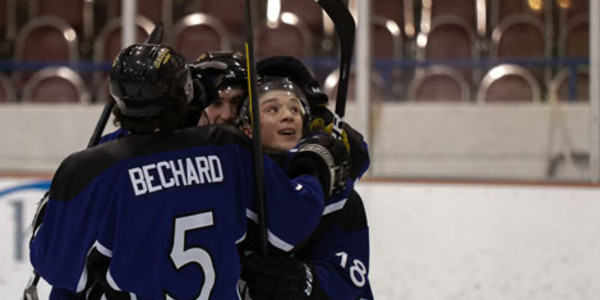 EUGENE, Ore. - The Eugene Generals scored a late goal in the third period against the Vancouver Victory that allowed them to win the game 3-2.

The Generals, who were down one game in a best-of-three game series, battled valiantly against the Victory tonight. Now, both teams are facing elimination and the winner of tomorrow afternoon’s game will advance to the next round.

Eugene was the first and last team to register points on the scoreboard tonight.

The Generals received their first goal after Julian Herrera set a drop-pass for Matt Hopersberger. After receiving the drop-pass, Hopersberger fired the puck between the legs of Victory goalie Mitch Saviola. Hopersberger’s goal was recorded 10:21 into the first period.

The Victory held the Generals scoreless in the second period, and managed to tie the game.

Victory player Cam Calloway scored from a snap-shot that deflected off of the glove of Generals goaltender Brad Robertson and found its way into the back of the net. Calloway scored his goal 18:38 into the second period.

The Victory took the lead for a moment in the third period, but the Generals responded quickly and won the game.

Victory forward Joe Bordak intercepted a Generals turnover at the edge of the Vancouver defensive zone, and worked his way into down the ice. Bordak put a quick deek on the puck, before placing it into the back of the net 13:31 into the third period.

Generals forward Justin Huelsman tied the game 2-2 moments after Bordak’s goal. Huelsman scored off of a wrist shot that beat Saviola and lit the lamp 13:56 into the third period.

Generals forward Randy Ludwig threaded the needle on an across ice pass that was collected by Team Captain Christian Merritt. Then, Merritt flexed his leadership muscle by firing the puck past Saviola and lighting the lamps for the final time of the game. Merritt scored 19:50 into the third period.