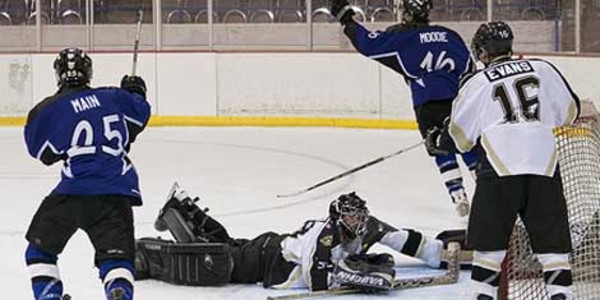 Southern Oregon started out strong scoring the first three goals of game. Midway through the first period Tim Munez scored off an assist from Ian Redlinger. The first goal was quickly followed by another goal from Dario Torres with the lone assist from Bobby Ruddle.

The Spartansï¿½ Greg Evans started off the second period with another goal during a Southern Oregon powerplay, leaving the Spartans with a 3-0 lead. Sean Park started Eugeneï¿½s comeback with an impressive wrap around goal off an assist from Kyle Kennedy. Then Jordan Blake-Jones slap shot added another goal for the Generals, which was assisted by Brad Main.

Three minutes into the third period the Generalsï¿½ Justin Huelsman shorthanded goal tied the game and with assists coming from Kyle Kennedy and Connor Bambico. Southern Oregon gained the lead a minute later when Dane Irving scored during a Spartans powerplay. The Generals pulled their goalie and were able to find the back of the net with less than a minute left in the third period to send the game into overtime.

Two minutes into overtime Patrick Moodie found the back of the net to win the game for the Generals and end a three game losing streak.

"We played a very lackluster first period, which certainly was frustrating after our strong performance last night but Iï¿½m proud of the way the boyï¿½s responded to the adversity they created for themselves," head coach Chuck Kennedy said about the game. "They put on the hard hats and just kept working until good things started to happen. It was a very nice team effort."

The Generals have two home games next weekend against River City on Friday night and Seattle on Saturday night. Both games will begin at 7:35 with the pregame starting at 7:15 and will be broadcasted on EGHN.