Generals Are Unable To Beat The Spartans 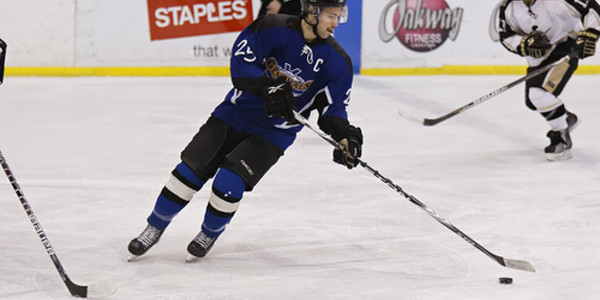 The Eugene Generals (21-24) lost to the Southern Oregon Spartans (31-13) 2-5 on Saturday night. The Generals faced off against the Spartans twice this the weekend, February 4th and 5th, with Southern Oregon coming out on top both games.

Southern Oregon came out strong and scored within the first minute of play. The gameï¿½s first goal came from Mike Obrien with assists from Chris Whitten and Mike Feagan. The Spartans led for the remainder of the game.

Midway through the second period Whitten was able to add to the Spartansï¿½ first goal with the help of Feagan and Jun Martin. Then, Eugeneï¿½s Randy Ludwig was able to put the Generals on the scoreboard with assists from Brad Main and Kirby Carlson. Ludwigï¿½s goal cut the deficit to one going into the third period.

ï¿½I felt our squad showed tremendous perseverance this weekend with all our injuries and just our overall shortness on the bench,ï¿½ said Head Coach Chuck Kennedy. ï¿½We showed everyone we are a fighting group and Iï¿½m real excited for our prospects once we get healthy.ï¿½

The Generals will play the River City Jaguars and the Seattle Totems next weekend, February 11th and 12th, at the Lane Events Center- Ice. Both games will begin at 7:35 pm with the EGHN pregame coverage beginning at 7:15pm.

For more information on the Eugene Generals of EGHN visit eugenegenerals.com .