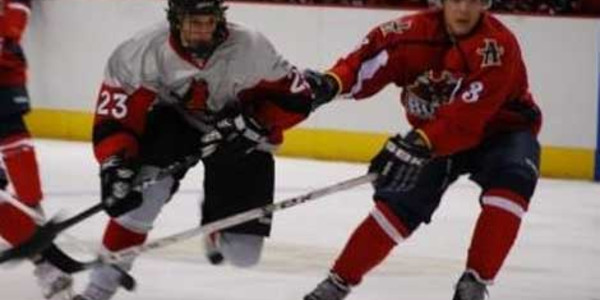 In Christian Merrittï¿½s first game in the North American Hockey League (NAHL) he scored a goal early in the second period and assisted another in the New Mexico Mustangsï¿½ win against the Amarillo Bulls demonstrating that he will be a valuable addition to the Mustangsï¿½ squad the remainder of the season.

Merritt got the call to move up to the NAHL towards the end of January and the next day he was in New Mexico skating for Mustangs. "It was definitely unexpected," recalls Merritt. "Coach Kennedy called me into the office one day and told me the Mustangs were interested. They wanted me to fly out there the next day." Earlier in the season Merritt stated it was one of his main goals to move up to the NAHL.

While Merritt was a General he accumulated 24 goals and 23 assists during the 39 games he played during the 2010/2011 season. Merritt ranked second in points on the Generals and 21st in the entire NORPAC conference with 47 points.

Merritt hopes to be as successful with the Mustangs at the higher level of hockey and can all ready see a difference in his play resulting from the differences between the levels of junior hockey.

"The game speed is a lot faster," Merritt explains. "Not necessarily just the speed of the other players but the increased game speed meaning I have to make quicker decisions out on the ice."

There are differences off the ice that Merritt must adjust to as well. One example is the use of the veteran-rookie system, which requires players to play in 25 games before earning veteran status. As a rookie, players are responsible for tasks such as packing and unpacking the bus, making sure the locker room is clean, and making sure pucks are picked up after practice.

Despite these changes, Merritt is adjusting well to the new atmosphere. "Everything is going great with the new team," he says. "The team is playing well and I can see myself improving each day." Merritt is also looking ahead to next season with the Mustangs. "It looks like it will be a promising next season," Merritt says about the teams play.

Merritt is thriving so far with the NAHL but he credits the Generals with helping him get there. "I learned a lot about myself while playing with the Generals," says Merritt. "Self-accountability, on and off the ice, is one of the biggest things I learned in Eugene that I will take with me to New Mexico."

For more information on the Eugene Generals of EGHN visit eugenegenerals.com.