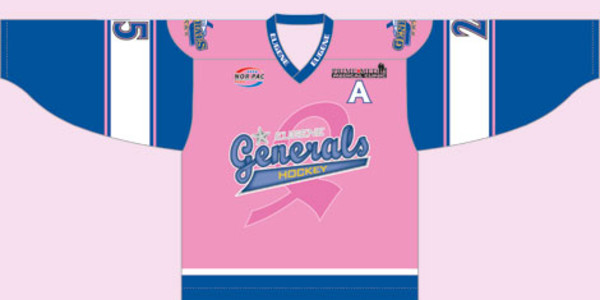 The Eugene Generals (5-2) come from a 3-0 deficit in the first period to defeat the Tri-City Titans (1-6) on the Generals 4th Annual Breast Cancer Awareness Night presented by Prime Med Medical Clinic. The Generals came out of the gate incredibly slow, which led to the 3-0 first intermission deficit, but were able to outscore the Titans 8-1 over the course of the next two periods. The win pushes the Generals to 4-0 all-time on Breast Cancer Awareness Night.

“I’m not going to lie, that first period had me concerned, but it gave the boys the opportunity to overcome a large deficit,” Generals Head Coach Jay Miller stated after the game. “After that first period it could have gone two ways. We could have sunk into a deeper deficit, but, instead, we stepped up and played like I knew we could.”

The Generals started their scoring 2:35 into the second period when Neil Holder found Joe Myers on the back door who easily pushed the puck past Titans goaltender Josh Romeike on the power play. Eric Watters was also given an assist on the goal. Joe Myers would strike from the back door on the power play again when Michael Frei handed him the puck 11:06 into the period to make it a 2-3 game.

Frei would lead the Generals with three goals and an assist, but five other players for the Generals had multiple point games. Carl Lehtola and Ryan McDonald both had a goal and two assists, and Michael Schlagel had three assists. Joe Myers had two goals in the game, and John Strahle had a goal and an assist. Kyler Zimick, John Mullin, Neil Holder and Eric Watters each had an assist on the game. Kevin Aslett made 27 saves in the win.

The Generals will face the Titans tomorrow night at Lane Events Center-Ice at 7:35 PM. The game will be broadcast on GiTV. For more information on upcoming games or GiTV please visit eugenegenerals.com.