Generals Come From Behind to Sweep Titans 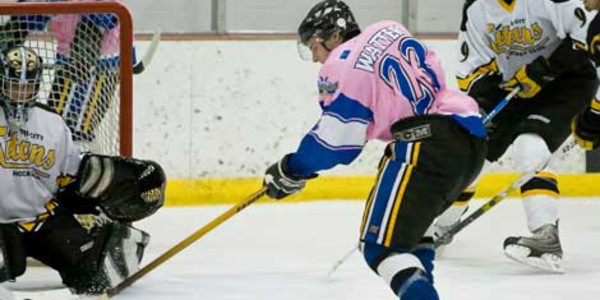 Eugene, OR – The Eugene Generals (6-2) came back from two one goal deficits tonight at Lane Events Center-Ice to defeat the Tri-City Titans (1-7) 3-2. The Pacific Division second place Generals are now eight points behind the division leader Seattle Totems, and will travel to Mountlake Terrace, WA next Friday and Saturday to face the Totems.

“The game was closer than I would have liked to have seen, but again I have to give credit to our team for battling back,” Generals Head Coach Jay miller stated. “It was a hard earned win, and a good two points.”

Both of the Titans goals came in the first minute of the first and second periods, but the Generals were there to answer back each time. First, it was Joe Myers assisting Carl Lehtola 8:27 into the first period, then it was Lehtola and Kyle Mills assisting Michael Schlagel on the power play 13:21 into the second period. Tyler Poulsen would get his first point of his Generals career when he and Michael Schlagel assisted Eric Watters 3:03 into the third to ice the game for the Generals.

The Generals were once again able to hold the Titans scoreless on five power play opportunities, and the Generals scored on one of three of their opportunities. Kevin Aslett stopped 28 of 30 shots on net to earn his fifth win of the season.

The games against the Seattle Totems next Friday and Saturday at 8:10 PM in Mountlake Terrace, WA will be broadcast on GiTV in audio only. For more information on upcoming games or GiTV please visit eugenegenerals.com.