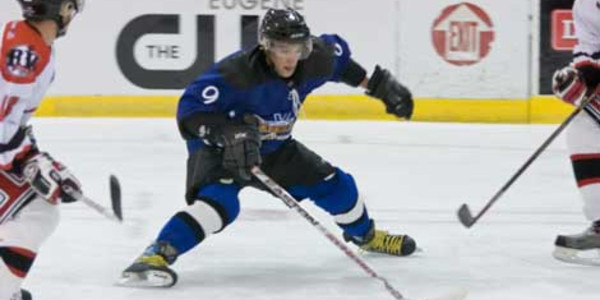 Eugene, OR – The Eugene Generals (8-3) defeated the Rogue Valley Wranglers (1-9) 10-2 at Lane Events Center-Ice. The win comes after a split in Mountlake Terrace, WA against the NORPAC Pacific Division first place Seattle Totems (12-2). The Generals were able to come away with a 5-4 OT victory on Friday, but lost to the Totems 4-5 on Saturday.

“The guys came out after two tough games in Seattle and started a little slow,” Generals Head Coach Jay Miller stated after the contest. “But, they were able to recover and put the game away. We have to rest up over the next couple of days, and get prepared for Coeur d’Alene [Lakers] and Rogue Valley [Wranglers] this weekend.”

The Generals had six players who put up a multiple point night. Michael Frei led the way with one goal and four assists, and Michael Schlagel followed him with four assists. Carl Lehtola had three goals on the night, Johnathan Isbell had two goals and an assist, Ryan McDonald had a goal and two assists and Tyler Morgan and Neil Holder each had a goal and an assist.

Five other Generals had a point on the night. John Strahle scored the tenth goal for the Generals. Tyler Poulsen, Ian Evans, Kyler Zimick and Jordan Blake-Jones each had an assist. The assist by Blake-Jones was his first of the season, and before tonight he was the lone General without a point. Nolan Ohmart stopped 23 of the Wranglers 25 shots on the night.

The Generals will host the Coeur d’Alene Lakers (3-7) this Thursday at 8:05 PM at Lane Events Center-Ice, and will host the Wranglers this Friday and Saturday at 7:35 PM. The games will be broadcast on GiTV. For more information on upcoming games or GiTV please visit eugenegenerals.com.