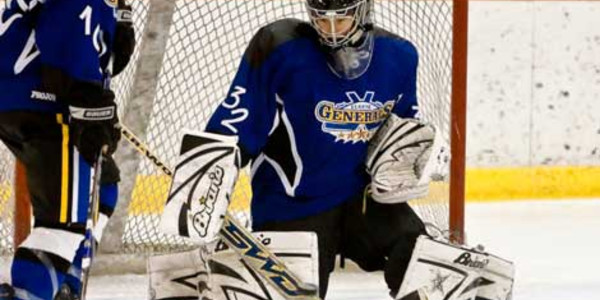 The Eugene Generals (9-3) defeated the Coeur d’Alene Lakers (3-8) 2-1 tonight at Lane Events Center-Ice. The typically potent Generals power play couldn’t put one past the Lakers in 7 opportunities, but were able to get a power play goal with 1:34 left to go in the contest. The NORPAC Pacific Division second place Generals will have to face the Rogue Valley Wranglers (1-9) tomorrow and Saturday night to finish the busiest nine day stretch (six games) in franchise history.

“I felt like the way we played didn’t reflect the scoreboard,” Generals Head Coach Jay Miller stated after the game. “Our boys came out gunning tonight. They hit hard, and skated quickly all night. We just needed to finish a few more opportunities, and put the pucks into the net. It was a good step to accomplishing our goals.”

Ryan McDonald fed Sean O’Connor in the slot with 26 seconds left to go in the first to give the Generals a 1-0 lead, and to give O’Connor his first goal of the season. Both teams failed to score in the second period, but Jamieson Webking and Cameron Hoffman assisted Zack Haight 1:51 into the third to knot the game at one a piece.

John Strahle ripped a slap shot past Lakers goaltender Brandon Amatto on the power play with 1:34 left to go in the third period to give the Generals the lead, and a lead they would not relinquish. Michael Schlagel was given an assist on the play, and Schlagel now has ten points in his last four games.

The Generals games against the Wranglers tomorrow and Saturday at Lane Events Center-Ice at 7:35 PM will be broadcast on GiTV. Fans who wear Halloween costumes to tomorrow night’s game have the potential to win give away prizes. There will also be a Skate with the Generals after the game. For more information on upcoming games or GiTV please visit eugenegenerals.com.