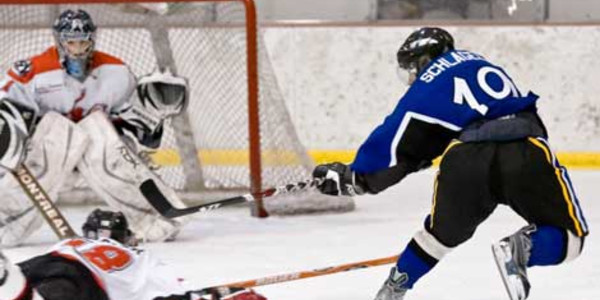 Eugene, OR – The NORPAC Pacific Division second place Eugene Generals (11-3) defeated the Rogue Valley Wranglers (1-11) 6-3 tonight at Lane Events Center-Ice for McDonald’s Night. The Generals have now pulled within two points of the division leading Seattle Totems. The Generals were able to win five of the six games they played in the last nine days, but they will be on the road for the next thirteen of their fifteen games remaining in November and December.

“Rogue Valley was a very good opponent tonight,” Generals Head Coach Jay Miller stated after the game. “They fought hard to stay in it all game, but we were able to hold them off and get the win. I was really impressed with [Jared] Blanton, the Wranglers goaltender. We hammered him with shots for the entire game, and he played phenomenally to hold us to six goals.”

The Generals did outshoot the Wranglers 73-22, and Blanton was able to turn aside 67 of the shots. Nolan Ohmart earned the win while stopping 19 of the 22 Wranglers shots.

Michael Schlagel was the star for the Generals as he scored two goals and added an assist. Michael Frei also added two assists on the night. Kyle Mills, Tyler Morgan, Blake Bishop and Joe Myers each had a goal, and Ian Evans, Trevor McCarty and Ryan McDonald had an assist.

The Generals will travel to Coeur d’Alene to face the Lakers next Friday and Saturday at 7:20 PM. The game will be broadcast on GiTV. For more information on upcoming games or GiTV please visit eugenegnerals.com.