Generals Push Record to 9-0 against Wranglers 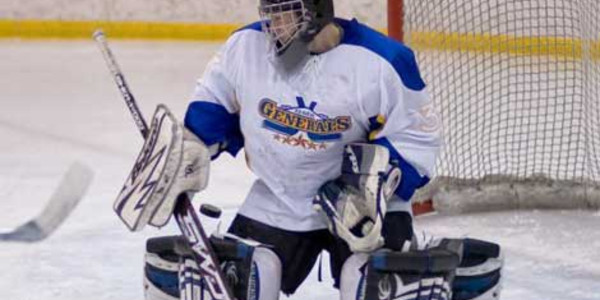 The Eugene Generals (27-6) were able to come away with two dominating performances against the Rogue Valley Wranglers (1-31) on Monday and Tuesday in Medford, OR. The Generals outscored the Wranglers 16-1 on the weekend, coming away with 4-0 and 12-1 victories. The Generals will have to travel to Medford one more time this season to wrap up the ten game season series.

“We were favored to win both games this weekend, and were able to do just that,” Generals Head Coach Jay Miller stated. “A team in Rogue Valley’s situation is always dangerous because they have nothing to lose, but we were able to play our hockey for the most part. I feel like we could have been better in certain situations and we can definitely come away from the weekend with areas to work on. Overall, I was happy with our performances down there, and now we have to focus on the game on Friday against the [River City] Jaguars.”

The Generals put up a dominating performance on Monday night, outshooting the Wranglers 60-15. The Generals gave up fewer and fewer shots as the night went on, allowing nine in the first, four in the second and two in the third. Wranglers goaltender Christian Kramer-Johnson played very well in net, and prevented the score from being far worse than it already was.

Eric Watters was able to get the game-winning-goal 6:29 into the first period, with the assists going to Johnathan Isbell and John Strahle. The Generals would get on the board again 9:32 into the period when Kyle Mills and Watters assisted Kyler Zimick to make the score 2-0. The Generals would get a third goal in the first when Tyler Poulsen and Neil Holder assisted Strahle 16:14 into the period.

The Generals were able to only get one more goal in the contest, which came on the power play 2:28 into the second. Sean O’Connor and Michael Frei assisted Michael Schlagel to make it 4-0. That is how the game would end, as Kramer-Johnson and the Wranglers were able to hold the Generals scoreless in the final 37:32 of the contest. Kevin Aslett made 15 saves to earn his third shut-out of the season, and is now tied atop NORPAC in that category.

The Generals put the game away early on Tuesday, scoring six goals in the first period. Eight Generals had multiple points on the night, and two Generals were able to get their first Junior hockey goal. Michael Frei led the way with two shorthanded goals and a power play goal. Frei now holds the top spot by 6 with 11 shorthanded goals on the season. Sean O’Connor was also able to put up three points on the night with a goal and two assists. Ryan McDonald was the only other General to have a multiple goal game as he was able to put two in the net.

John Mullin, who was one of the two Generals to score his first junior goal, had a goal and an assist along with John Strahle, Michael Schlagel and Neil Holder. Blake Bishop had two assists on the night. Tyler Poulsen and Ben Charlson (the second player to score his first Junior goal on the night) each scored a goal, and Kyle Mills, Carl Lehtola, Eric Watters and Joe Myers each had an assist. Kevin Aslett stopped 14 of 15 shots in the win.

The Generals now only need two more wins or two Tri-City losses to mathematically clinch a spot in the playoffs. The Generals sit in second place in the NORPAC Pacific Division, and lead the third place River City Jaguars by 20 points (Jaguars have four games in hand).

The Generals will host the River City Jaguars (17-12) this Friday and Saturday at Lane Events Center-Ice at 7:35 PM. Saturday night’s game is Military Appreciation Night. Any spectator who shows their Military ID will receive a 50% discount on tickets, and the Generals will be auctioning off the special camouflage jerseys they are wearing for the event on eBay. The proceeds of the auction will benefit the Lane Education Fund. The games will be broadcast on GiTV. For more information on upcoming games, special event nights, the jersey auction or GiTV please visit eugenegenerals.com.