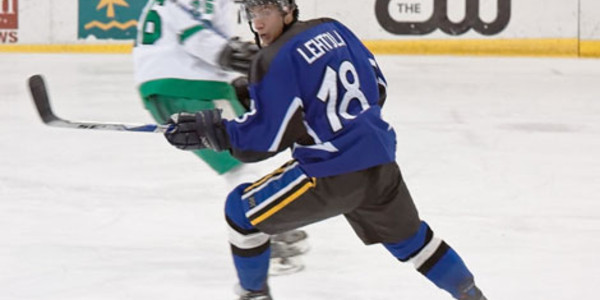 The Eugene Generals announced their 2008/09 Award Winners last night at the team’s End of the Year Banquet. Awards for Most Valuable Player, Bobby Freeland Golden Hard Hat Award, Player’s Choice Award (new this season), Best Offensive Player, Best Defensive Player, Most Improved Player, Volunteer of the Year and Host Family of the Year were given to their respective recipients at Outfitter’s Bar & Grill in Harrisburg, OR. The award winners and explanations of the awards are as follows:

Most Valuable Player- Carl Lehtola The Most Valuable Player award is given to the player judged to be most valuable to his team, and is voted on by the Generals front office staff. The 5-11 175 lb Irving, TX native is currently third on the Generals in scoring with 21 goals and 41 assists in 42 games. Lehtola leads all Generals forwards with 313 hits on the season, and is ranked fourth on the team with 7.5 hits per game. Lehtola is also third on the team in plus-minus with plus-41.

Bobby Freeland Golden Hard Hat Award- Eric Watters The Bobby Freeland Golden Hard Hat Award was named for the Generals first Head Coach who passed away in the summer of 2006. The award is given to the player who always shows up, and never gives up. The award is designated for a player who may not get all of the accolades, but does whatever is asked with a good attitude. Eric Watters is sixth on the team in scoring with 18 goals and 18 assists. He leads the Generals with a 19.1% shooting percentage.

Player’s Choice Award- Michael Frei The Players Choice Award is given to the player judged to be the most valuable by his team. The fourth year General leads the team in points, and is ranked third in NORPAC in the same category. Michael Frei has scored 45 goals (new team record), and has put up 42 assists in 40 games this season. Frei is the all-time point leader for the Generals with 329.

Most Improved Player- Justin Huelsman The Most Improved Player award is given to the player who has shown the greatest improvement over the course of the season. Huelsman, a 16 year old native of Eugene, started the season on the Generals practice squad, and made his first appearance in a game for the Generals on December 5 against Tri-City. Huelsman has played in 18 games this season.

Volunteer of the Year- Chantelle Russell The Volunteer of the Year award is given to the volunteer who has shown the most excellence and commitment in their position. This is Chantelle’s fourth year as Strength and Conditioning Coach for the Generals. Under Russell this season the Generals have lost fewer man-games to injury than in any past season.