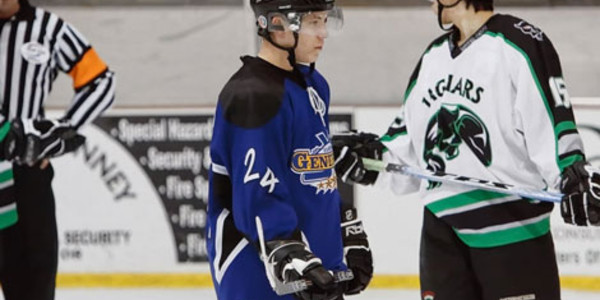 The Eugene Generals (38-10) split their final two regular season games against their 2009 Pacific Division Semi-final opponent River City Jaguars (26-22). The Generals were able to come away with a 3-1 win on Friday, but were defeated by the Jaguars 9-2 on Saturday. The Generals were resting several top players on Saturday in an effort to keep the team healthy heading into the playoffs, and to give the younger players a chance to prove themselves against a playoff contending team.

“River City is a very physical team, and we didn’t want to risky any injuries before the playoffs,” Generals Head Coach Jay Miller stated after Saturday’s contest. “Resting some of our top players also gave me a final chance to see what some of our younger players could do against a great team. I feel that I saw what I needed to see, and I’m confident heading into the first round of the playoffs.”

The Generals who didn’t play in the contest on Saturday amassed 300 points in the regular season, which is 47.5% of the team’s total points on the season (631). The Generals did see some great things from their younger players in the 9-2 loss, however.

The Generals will travel to Beaverton, OR for their first two playoff games against the Jaguars. The Generals will play the Jaguars on Tuesday at 4:15 PM at Valley Ice Arena, and the two teams will meet on Wednesday at 8:30 PM at Valley Ice Arena. Both games will be broadcast on GiTV in audio only. For more information on upcoming playoff games or GiTV please visit eugenegenerals.com.