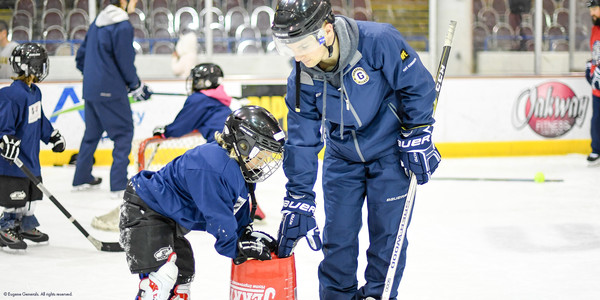 On Saturday afternoon, the Eugene Generals worked with the next generation of skaters at USA Hockey’s sponsored “Try Hockey For Free Day.”

Even with its series finale versus the Tacoma Rockets looming later in the night, the Generals showed up to The Rink Exchange early to work with kids trying youth hockey for the first time.

Nearly the entire Gens roster was on hand to assist approximately 30 kids in attendance. Players helped kids get fitted with proper equipment, learn how to skate, and develop stickhandling and other skills.

Many of the kids participating – ages 4 to 9 – started the day struggling to stay up on the ice. However, with guidance from the Gens and encouragement from friends and family, many kids finished the day cruising around the rink and beginning to look like future hockey players.

“Beginning to end, it was a fantastic event,” said Generals GM Alex Stimson. “It was a tremendously rewarding experience for our players to engage with the local hockey community and introduce so many young kids to the game. I’m so proud of how they conducted themselves with both kids and parents in attendance. Most importantly, they played a major part in growing the game of hockey in the Emerald Valley, and their efforts will be felt for years to come.”

Eugene worked closely with the Lane Amateur Hockey Association (LAHA) – the host organization for the Jr. Generals – in coordinating the event. Who knows…kids participating in the event might be a Jr. General and Eugene General one day!

The event, now in its ninth season hosted by USA Hockey, is part of Come Play Hockey Month. Roughly 450 local associations across the country have introduced hockey to over 100,000 children nationwide.