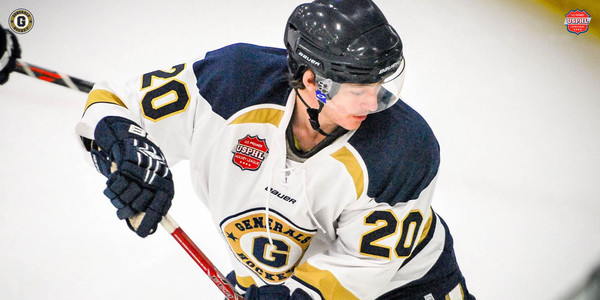 You see them on the ice, but what are they like off of the ice? Throughout the 2016-17 season, we'll invite you to #MeetTheGens by taking an in-depth look at the Eugene Generals roster, one-by-one. Today, we introduce you to Kory Palmer.

A native of Salt Lake City, Palmer is currently in his second season with the Eugene Generals. Growing up in Utah, his family frequently brought him to see Utah Grizzlies games, members of the ECHL. It was at those Grizzlies games seeing players like Trevor Lewis, Steve Ott and Mike Smith that Palmer fell in love with the game.

Palmer's junior hockey career began north of the border with the Bradford Bulls, members of the Greater Metro Hockey League, before making the decision to jump back to the states and play closer to home while advancing his hockey career. It was then that Generals Assistant Coach Daniel Gomez reached out to Palmer, a fateful call that proved to be the first step towards Palmer calling Eugene his new hockey home.

Palmer soon made the decision official by joining the Generals for the 2015-16 season, the very first full season under Head Coach Justin Kern. After missing the postseason in the 2014-15 season for the first time in franchise history, Palmer proved to be a key part of a Generals team that returned to the playoffs for the eleventh time in twelve seasons. His impressive rookie campaign (14 goals, 8 assists, 22 points) has set up a sophomore season that he hopes will catch the eyes of college scouts so that he can have an opportunity to play at the next level.

Assistant Coach Daniel Gomez spoke highly of the talented two-way player, stating, "Kory is one of the calmest players on the ice, which made the difficult transition from forward to defenseman a little easier for him than most. His smooth hands and heads-up passing will get us out of the defensive zone quickly when he is playing his best hockey. Being one of our returners and veteran players, I was very happy to see 'Palms' back this year."

When he's not on the ice honing his craft, Palmer enjoys spending as much time with his teammates as possible, noting that, "This year's team has the best camaraderie that I've ever been a part of. Everyone gets along and always has each other's backs. We are truly a group of brothers."

The Generals will now travel to Kennewick, Washington for a two-game series vs. the Tri-City Outlaws starting on Friday, November 6th and concluding on Saturday, November 27th. Both games are scheduled to start at 4:05pm with coverage provided via HockeyTV and updates provided on Twitter.

The Generals home schedule resumes on Friday, December 2nd as the Generals welcome the West Sound Warriors to town for a two-game series, the first time this season that the Warriors will have visited Eugene. Tickets are available in advance via www.EugeneGenerals.com or in-person at the Eugene Generals box office before every home game, located at The Rink Exchange. Remember to follow the Generals on Facebook, Twitter and Instagram for updates and behind-the-scenes content throughout the 2016-17 USPHL season.